Last night's cold rain made Jenny and me eager for a hot dinner. And, with her parents in town to take care of the kids, we made a break for Wu Ji's Mala House in San Jose. At Wu Ji's, one is presented with two columns on the menu, one for house hot pots and one for mala hot pots. Each category had the same selection of meat: pork, beef, lamb and shrimp. 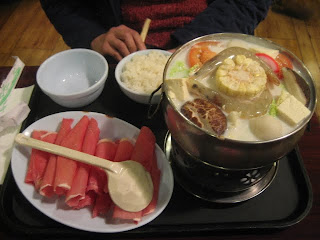 The house pots can be made to order as far as spiciness, but off the menu they're served without heat. For the mala hot pots, the degrees of hotness at Wu Ji's go from one to five. I was warned that a "two" is spicier than the highest level found at a typical Korean tofu house. With that being about my level, I went with the two. Jenny was told she could have her pork house pot at "0.5", but declined and went with the standard. It was a good call, as her broth was just about the most delightful I've ever tried at a restaurant and it was better left uncompromised.

We were told the broth was made using pork bones and "dairy", which was evidenced by the froth as the soup reached a sustained boil at our table. The most prominent flavor, though, was that of sweet corn, the cob of which sat in the center of the pot. Also prominent in the house pot were tofu, unpeeled shrimp and cabbage, the last of which Jenny particularly enjoyed. Coming with each of our individual pots was a fair quantity of thinly sliced raw meat. The lamb that accompanied the mala pot was good, having that signature gamey flavor, but what stood out in my soup were little delights of my childhood, such as pork intestine and stewed tripe. Beef tendon was also included. Bean noodles are the default starch for all pots, but one could substitute rice instead, as Jenny did.

The service was marginal but one was more likely to feel sorry for the server than upset. Jenny was originally served the wrong meat, my burner arrived at the table without a flame and our glasses of water were never refilled. Our server was clearly overburdened and I wondered why the management hired only her to support the entire restaurant.

There is truth to the claim that a level two is hotter than the spiciest one would find at typical Korean tofu house. I left with my mouth slightly wounded and even the skin around my lips was warm for at least an hour afterwards. The next time I visit Wu Ji's I'm going to make less work of it and order up the house pot my wife had--that broth is just too delicious to pass up.

I would not recommend bringing the kids for at least a couple of reasons. Their sensitive buds might not withstand the boiling soup, first of all. Second, the burners underneath the soup, with their often errant flames licking the sides of the pots, are a safety hazard. With all that heat surrounding us and inside of us, it was no wonder that few in the restaurant seemed to mind that the front door was left open to admit the chill of a cold December night.