My dad and Chinese food seem to always go together. When he visited earlier this week I took advantage of his talent for selecting the right restaurant and ordering the right dishes to fit the mood and even the weather. Tuesday, we ventured to Cooking Papa and ordered up some classic Cantonese dishes. 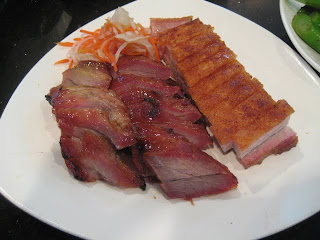 We began with the double plate appetizer with honey barbecue pork and roasted pork belly. The gleam on the barbecue pork (or char siu) from the honey glaze and was a positive indicator of its freshness. The pork was sweet, tender and impossible to resist but it was only the second-best meat on the plate. The preparation of the pork belly made it the best part of our lunch and it achieved a delicate balance: crisp skin with soft, tender meat. One could easily see the multiple layers in the cross section, including the skin, fat and pork. 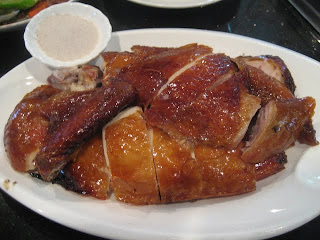 Next to arrive was the Papa Roasted Chicken (or "diu siu gai" in Cantonese). Or, loosely translated, "hanging roasted chicken". That is, the chicken was marinated during the roasting process, when it was suspended. It was very similar in substance and preparation to its close cousin, the more often-seen Hong Kong roast chicken. The meat was soft, juicy and the skin crisp and delicious. It had been a long while since I'd had its equal (probably at Joy Luck Bistro in Cupertino). 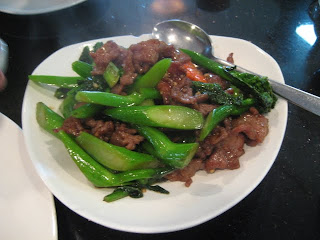 One indicator of whether a good restaurant is, well, worth its salt, is the quality of a simple dish particular to its cuisine. For Shanghainese, that may be crystal shrimp. For a Cantonese restaurant it could be beef with broccoli. I'm told, in fact, that cooking this dish is often the entrance exam for a propspective chef in Hong Kong. Using that as a measure, Cooking Papa gets an A. The meat was very soft with a lot of oil yet wasn't at all soupy or wet at the bottom of the plate, very different from the same dish I'd had only a day earlier at Joy Luck Bistro). The broccoli was crisp. Overall, I was taken by how hot and fresh the plate was, almost making it a shame to order this dish for take-out.

The porridge with fresh clam and winter mellon was probably the weakest of the four, but neverthless provided a change from the usual fish or beef jook. The clams were served in their shells, though one or two of them were stale. The porridge, as should be expected, was piping hot and hence made me forget I was sitting next to the front door on a cold December day.

Packed full by the four dishes, I had to decline dessert. It was a decision that came with great difficulty. Cooking Papa's Hong Kong Style Egg Puff is my favorite dessert offered by any Chinese restauarant anywhere. Always served hot, the exterior of the pastry is crisp, but just so, and the interior is as light as air itself. At four puffs for three dollars, the dessert is the steal of the Bay Area and is reason enough to make a special trip to this standalone restaurant. It's why I chose Cooking Papa for my 2010 birthday dinner and why it'll probably be my choice in 2011.