A couple of weekends ago Jenny's parents took us out to Fu Lam Mum for dinner. Always busy for dim sum, Fu Lam Mum proved it can serve up full fledged dinner dishes as well. 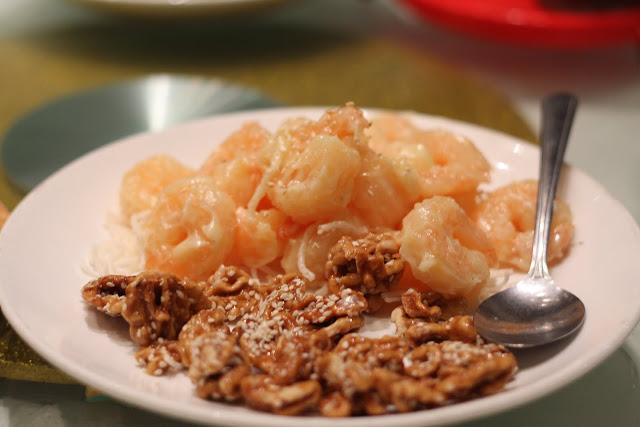 We got started with the sizzling seafood soup. It was luke warm and without much sizzle. The flavor was good, though, and they certainly didn't cheat you on the squid. Things got much better from there. The pumpkin with beef was my favorite of the night, both because it was original and it was delicious. Who would have thought beef and pumpkin go together? The steak was tender and had a barbecue flavor. The pumpkin was in a lightly fried batter, making a delectable morsel that was crisp on the outside and soft on the inside. 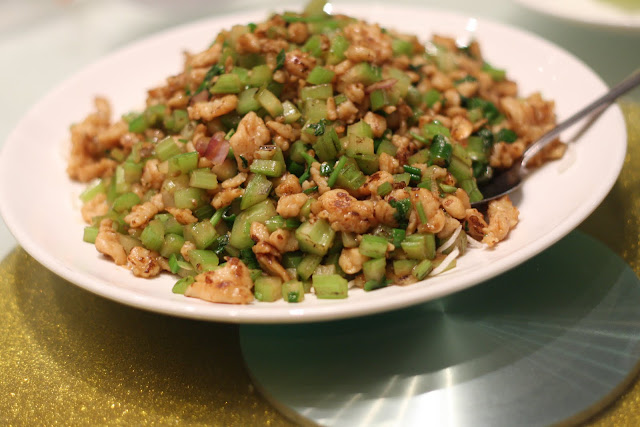 "Crisp on the outside and soft on the inside" would also describe the tofu medallions we were served along with scallops. Everyone at our table agreed the dish was super salty, but we tolerated it anyway and went for seconds because the texture of the tofu was undeniably out of this world. The minced chicken with celery cups was a dish I'd order again, but largely because of the quantity. The meat was slightly burnt, but I liked the resulting smokey flavor.The crab yi fu noodles were silky soft. Don't get this dish for the crab as there really wasn't much to speak of. Searching for the crab was almost like a treasure hunt. I truly enjoyed the dish, though, for the noodles. My boys liked this one, too. 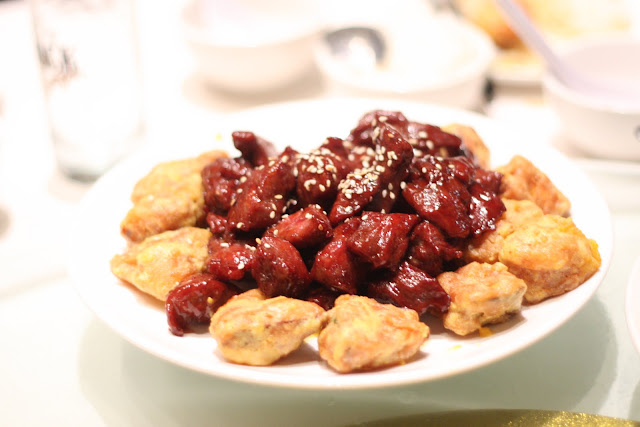 Almost anywhere you order it, the shrimp with walnuts usually can't miss with me and it didn't this time, either. I was especially impressed by the jumboness of these jumbo shrimp. Holy wow. Also, the walnuts could have been a dessert in themselves.

For our official dessert we were given the choice of mango pudding or red bean soup, either with the compliments of the restaurant. I had the red bean soup and loved it--it's hard to go wrong with something so hot and sweet. Those who went the mango pudding, I'm told, were likewise satisfied with their choice.

I look forward to going back. Downtown Mountain View can by busy, especially on weekend nights. However, there's plenty of room at Fu Lam Mum for dinner. Don't let the sparse crowd fool you either. They'll serve up something you'll like and you'll walk away full. 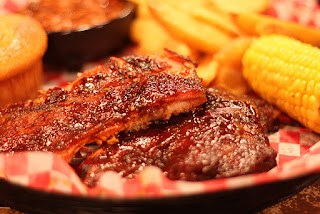 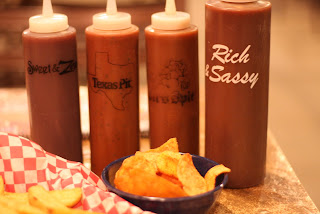 Off by myself in Chandler, Arizona last week on a lonely Tuesday night the Famous Dave's restaurant at the Chandler Fashion Center stood out like an oasis. Dave's and I both come from Minnesota, after all, and I almost always make it a stop when I go back to the Midwest. There's a Dave's in Gilroy, but I've had only carry out from there and it's just not the same.

Never one to mess around during that rare visit to Dave's, I got the Award-Winning Ribs. I really don't know what Dave's does to make such terrific ribs that just can't be found anywhere else. Just as I expected, the tender, fatty meat fell off the bone, almost by gravity alone. The flavor was impeccable and didn't need any additional sauce. In fact, when I go to Dave's I almost always go for the unadulterated experience. Tuesday, though, I couldn't help myself.

I couldn't help but notice there were no fewer than four different sauces at my table. Also, the waitress was thoughtful enough to bring a bowl of potato chips for me to try out each sauce. Why waste valuable baby back just to try out a sauce? I still maintain no sauce is needed, but if you must, here's a primer:

Sweet and Zesty: Just like it sounds. I like things tangy and spicy, so this was my least favorite.
Texas Pit: Very smoky (how do they bottle that?) and spicy
Devil's spit: Of the four, it tastes the most like a traditional barbecue sauce, except it's spicy. This one was my favorite, but perhaps I liked it also because of the name.
Rich and Sassy: Big on tang and even had a strong hint of citrus.

Slurping the different sauces and mixing them together was probably the funnest part of the dinner (yes, kind of sad, but as I said, I was alone).

The fries were hit and miss. Though all were crisp on the outside, some were mealy on the inside, while others were good and fluffy. The other side I ordered was the Wilbur Beans, which came with shreds of brisket, jalapeno, sausage and pork. What a great combination! It'll be hard to take beans any other way from now on.

For me, having discovered Dave's, going to Chandler, Arizona on business (been there twice over the past nine days) just got a lot more attractive. Get there early, though, as the lot filled up on a weeknight. For some solitude, especially during those cold fall and winter nights, try sitting outside. Just wear a jacket. 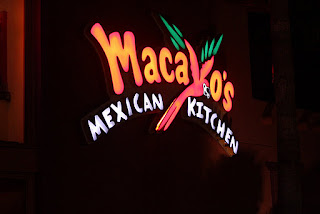 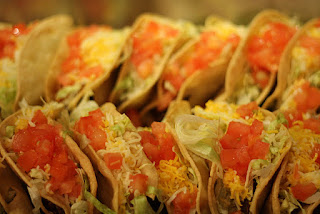 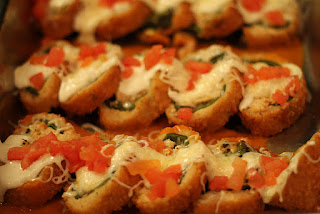 I organized a conference held in Arizona earlier this week. We had dinner for our event at Macayo's in Mesa. There were about 100 attendees in our party and Macayo's handled the volume well. There were no fewer than eight servers dedicated to drinks, be it coctails, soda or water. As soon as I saw the buffet spread, I didn't think for healthy that dinner would be good for me. However, I knew from the get-go that I'd enjoy it.
The pork enchiladas came covered in a thick layer of melted cheese. You couldn't really pick up individual enchiladas so much as blindly scoop up enchilada parts with lots of cheese. Preparation of the chicken poblano with baja (jalapeno with cheese) sauce involved stuffing the pepper with chicken then frying it. It was delicious and I lost count how many helping I had.

I also had a chicken tamale, covered with cheese and worthy of seconds, and a beef taco. The taco shell was neither crisp, nor soft, but much like cardboard. The beef was overcooked. I quickly concluded there were too many good offerings at the buffet table for me to waste valuable stomach space on the tacos.

Macayo's proved itself to be more than able to support a big party and for that purpose I'd go back without hesitation. We told the restaurant ahead of time they'd need to prepare enough food for 125. Also, we ended up consuming 56 drinks. So, the total came to a hair less than $3300 including tip.
There are several Macayo's throughout the Phoenix area. The one we tried is in Mesa. 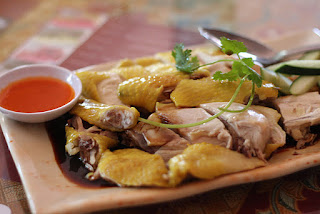 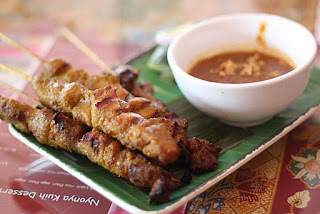 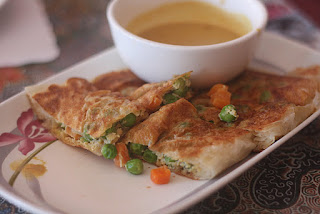 When my dad visits and we can't think of a place to go for lunch we often default to Layang Layang. Their long list of fine Malaysian offerings provides something appealing to everyone. When we went Sunday at 11:45 the restaurant was already packed and people were waiting at noon.

We began with the Roti Bdduist, an appetizer notable for its flour and egg skin. Though the peas and carrots filling wasn't very exciting, the dish nevertheless received a warm welcome at our table because it was the first dish and we were starving.

The next appetizer, the satay mix (chicken and beef) was flavorful and tender. The skewered meats can be eaten with a peanut-based sauce, which adds a little bit of sweetness. I went without the sauce, though, as I thought the satay had enough flavor on its own.

The 6-year-olds shared the Hokkien Mee, which featured thick noodles and chicken prepared with with a heavy dose of soy sauce. They loved it and fought over every noodle.

The Penang sizzling prawn came with a thick tasty sauce. The thick sauce with rice could have been a meal in itself--and a delicious one at that. It was spicy, though, even though the menu didn't say so. The Kari Lamb was spicy and without much lamb. It was loaded with vegetables, though, such as carrots and beans and the abundant sauce. The Hainan chicken, although we ate it all, was a bit of a disappointment. It didn't come with broth or rice, both of which are integral to the authentic dish. The chicken itself was bony but passable. However, the sweet and sour sauce was out of place.

With its breadth of menu items and hold on Malaysian Cuisine in and around West San Jose, Layang Layang is justifiably popular. However, it can be often hit or miss, making it a better choice when several dishes are going to be ordered, such as for large parties or me when I'm really hungry.