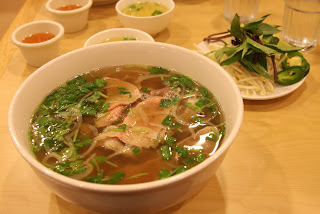 Living on the south end of the 650 area code, the challenge we face is finding a good bowl of pho nearby without a dry-throat-inducing, finger-swelling, cold-sweat-causing quantity of MSG. House of Pho strikes a good balance.

The pho was delicious and hot. I had the rare beef, tendon and flank steak and came away full. The broth was flavorful, but this could in part have been due to MSG. There were signs used at least a minimal amount of the stuff. Jenny and I were both thirsty after coming home and I wasn't able to yank my wedding ring off (not that I make a habit of this--honest--it's just that the ring test is as sensitive to MSG as a mass spectrometer).

Overall, the food was good and the quantity was generous, especially given the tab, a mere $30 with tax. What will bring us back, though, is the ambiance and friendly service. We asked for an extra soup bowl for the kids, they gave us two. They refilled our glasses with water multiple times. The ambiance was about the best of all the pho restaurants in our area. It's the clean, well lighted place of pho restaurants. I appreciated that tables were cleared by our server picking up the dishes and bringing them back to the kitchen rather than using a cart with a built-in garbage can (talk about an appetite-killer) so prevalent at pho restaurants. 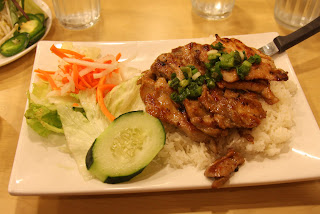 Best of all, the boys were full. In fact, Dylan ate more at dinner (he had the barbecued pork) than he ever has in recent memory. Tyler polished off his share of the barbecued chicken shown above. My, how they've grown. 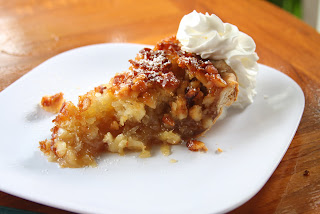 Last week, on our way up from Milolii on Highway 11 towards Kona we stopped at The Coffee Shack in Captain Cook, on the Big Island. The beautiful view overlooking the ocean from the restaurant was breathtaking and held our attention throughout the lunch! And, the geckos on the railing next to our table proved to be a great distraction for the kids. 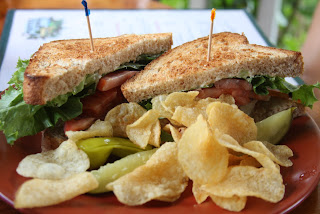 Jenny went with the special, which was an Ono sandwich. I thought the ono was a little overdone, but Jenny enjoyed it. The sandwich came with Maui-style chips. My salad (Garden Delight) was cold, crisp and fresh. There was a generous serving of avocados, which were taken from the ground underneath the giant avocado tree behind the restaurant. The size was generous, but at $10.95 it was a tad pricey. 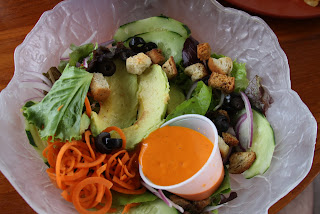 Tyler's grilled cheese sandwich featured thick slices of wheat bread, which was made with brown sugar. The sandwich was great, but it could have spent a little more time on the grill as it was a little under toasted. Dylan's pizza was notable for its fluffy crust. 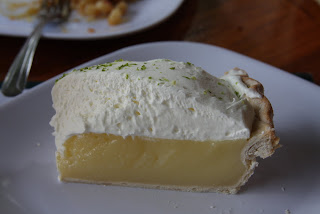 The Macademia nut pie was warm and sweet, but it wasn't what we ordered, so we were given a slice of the key lime, which we did order. It was made Kona limes and it was delicious. The lime flavor really stood out and the soft, collapse-in-your-mouth consistency of the cream topping was right on. 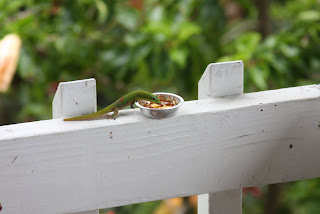 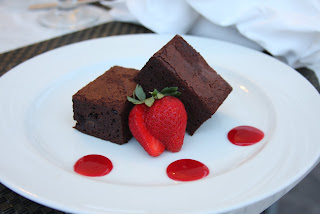 A week ago Friday, our first night on the Big Island, we stayed at the Waikoloa Beach Marriott Resort and Spa. Tired from the flight and not up for getting back into a car, we chose to eat downstairs at their restaurant, Hawaii Calls. The decision to eat there was made easier by their prime rib and crab buffet, which they offer every Friday. The variety was so-so, though, especially at $35 per head. However, entree menus were at prices similar to or more expensive than the buffet, so it was hard to turn down the all-you-can-eat option. Get there before 6:00, though, and you'll get $10 off the buffet making it a reasonable $25. 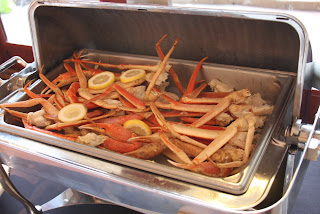 The prime rib was good, but not as well marbled as the cut that I wrote about in December. The cuts, of which I had four, ran from very rare to medium rare. The crab legs were a little firm, thready and crumbly. Generally, would have liked more meat choices. There was no fish. The chicken, in a creamy sauce, was delectable. 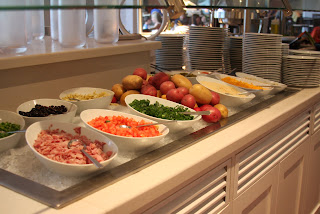 The potato was hard and my wife didn't want to finish it, although the potato bar was complete with every topping one could want. Looking at the ingredients, it's easy to see it doubling as an omelet bar for their brunch buffet. Corn on the cob was greasy, bathing in melted butter, but good. The pineapple was arguably the best part of the buffet--it was juicy and super-sweet. 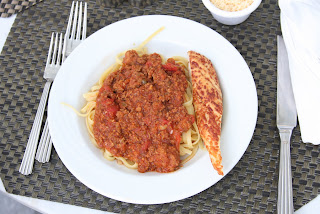 For the kids, we ordered from the menu. They loved their spaghetti and the brownies. The meat sauce was generous. A highlight of the buffet was the outside seating, which allowed us to look out over the resort's infinite pool and the ocean. Also, the lawn between the pool and our table provided a much needed outlet for the kids after they finished their brownies for dessert.
Hawaii Calls
69 Waikoloa Beach Dr Waikoloa, Island of Hawaii, HI 96738
808-886-7470
Posted by Loren at 9:10 PM 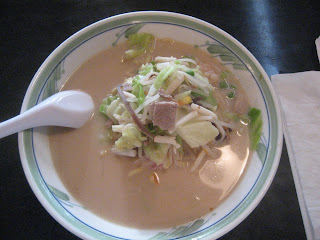 In need of some hot noodle soup during a recent rainy cold spell, we went to Ringer Hut in San Jose. I went for the Champon, which was a mix of many things in one bowl: ham, corn, cabbage, noodles, fish cake, beef, etc. Pictured here (top photo) is the regular. The broth was a bit spicy, almost too much so for one of my kids. The broth was also notable for its sesame seed oil, which I enjoyed. My younger son got a combo which included a small plate of chicken.

Jenny had the ramen. It was "decent", but not extraordinary. 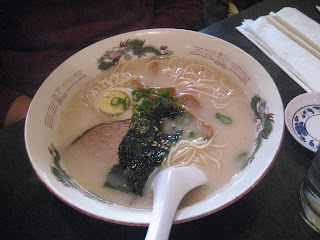 Dylan had a kids chicken combo (below). It came with three fried dumplings (gyoza), chicken teriyaki and rice. Both boys got ice cream, which they polished off at a much faster pace than their dinner. Dylan got the mango ice cream, Tyler the strawberry. 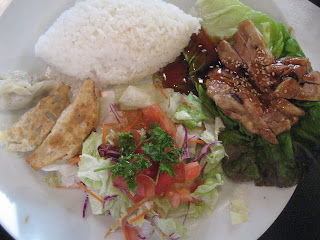 Service was attentive, friendly and well above average. A return trip for us is a certainty, but we'll probably need cold weather to prompt us to make the trip down from the mid-Peninsula. 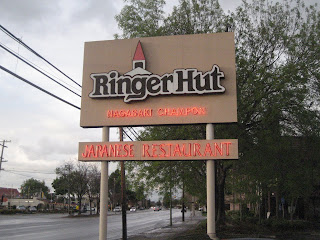