After seeing a lot of hype on the internet about the Tsukiji Fish Market, I felt compelled to visit last Thursday. So, I did what I was supposed to: I got up before 3:00 am and took a cab to the market, getting there by 3:25 am, the beginning of a two-hour wait for the first tour.


To be fair to the market itself, they never asked for us tourists to visit. In fact, I really got the feeling they'd rather not have people watching them. Nevertheless, they provided space for us to wait and an employee answered our questions and handed out vests (more on that later). Moreover, looking back I can't help but think our group was at best a distraction. And, they never charged us a yen. So, I truly feel the Tsukiji Fish Market is to be commended.

That said, I don't think I've ever been witness to a more over-hyped activity in my life. Time had this as the Number 1 thing to do in Tokyo? I would have to disagree--Tokyo has many better experiences to offer. However, it might be worth the trip to the Tsukiji Fish Market if you could go after a good night's sleep and not have to wait two hours in a room that doesn't have any chairs. As it is, you end up depriving yourself of sleep and killing your joints (whether you sit on the floor or stand in the waiting room) for an experience that will have you, at the end, shrugging your shoulders and saying, "Meh".

It's only natural to be intrigued by the hordes of cash that can be exchanged over what was once used for cat food in the 1960s. But, for all the talk about the astronomical figures tuna here can pull in (no article on Tsukiji, including this one, will let you forget about the tuna in 2013 that went for $1.76M), what sends tuna pricing into the stratosphere is the fact that it's the first tuna sold of the new year. There's some prestige and, some will say, some luck associated with reeling in that first fish of the year. But, relatively little is said about what's paid for a fish on some random Thursday in February. Maybe it's because it isn't nearly as much.

I enjoyed the auction itself, largely because of the singing of the auctioneers' whose styles complemented each other well. Here's the video I took:

A number of us in my group were surprised to find out that the vast majority of the tuna was frozen--hard as a rock frozen. (While I was there one of the fish, accidentally knocked by a buyer, spun around and wobbled on its side.) This only makes sense. Fishermen go to where the fish are and sometimes that means many days if not weeks away from Japan. So, the fish will need to be frozen on the spot once caught. However, if you have this romanticized idea that you're going to an auction where the fish were swimming in the ocean earlier that morning, to be sold to nearby restaurants for sushi breakfast served minutes later, disabuse yourself of that notion.

So, did I get anything out of the visit? Well, yes, it was a learning experience certainly. It was fun watching buyers flipped open the flaps near the tail so they could try to ascertain the quality of the tuna. (The flaps were intentionally cut for this purpose.) Or, with their pick axes many chipped away at ends of the tuna, inspecting the resulting morsels with a flashlight for fat content or disease. Also, part of the enjoyment was seeing the hustle and bustle outside of the auction area. We had to dodge a number of trucks that seemed to almost hit us and each other. Here's some video I took:

If you checked out all the images and videos online and still decide you want to go, remember to check the market calendar first. Otherwise, it'll break your heart to get there at 3:30 in the morning only to find out the market is closed, as is often the case on Wednesdays. 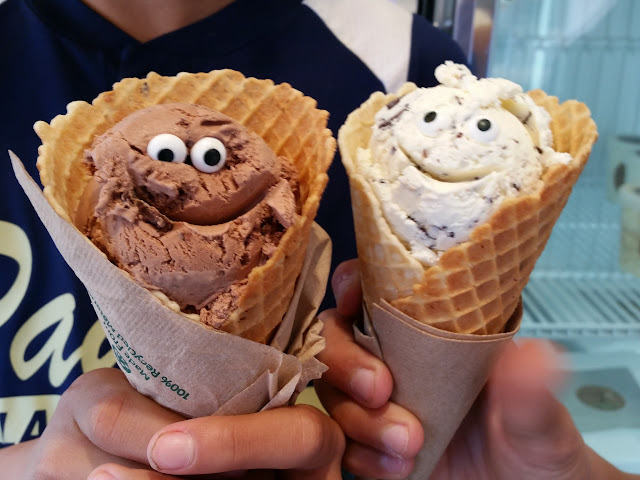 Walking through downtown Los Altos yesterday, we dropped by Tin Pot Creamery. Kids 12 and under can order a Kiddie Cone, which is much like a Mini but with eyes and a smile, which made at least one of my sons a little hesitant to eat it. But, not too hesitant. 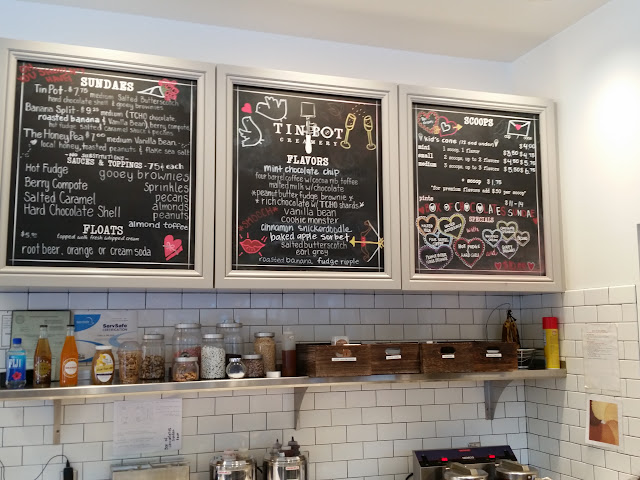 The older one opted for Premium Chocolate with TCHO Shards. This was the only flavor that carried with it a 50 cent surcharge. From my family's reaction, though, I could tell it was well worth the extra fee, and it was easily their favorite flavor. 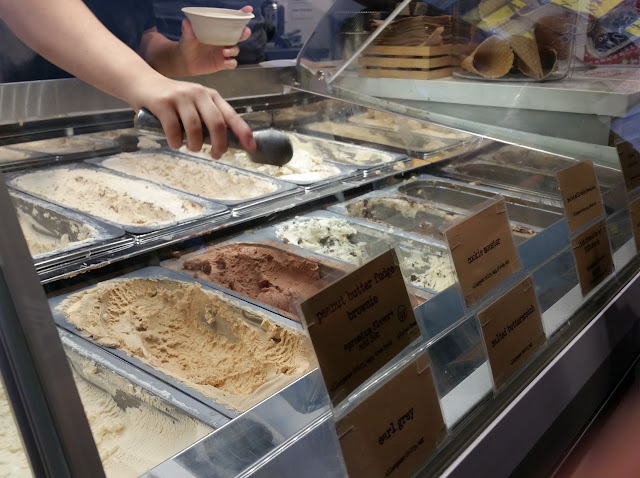 I liked the mint chocolate chip, as the herbal flavor from the mint really stood out. Jenny and I shared a scoop of Earl Grey, which carried a subtle flavor but, like the twins' cones, had a creaminess that separated it from what you'd find at Baskin Robbins or, for that matter, the Safeway across the street. 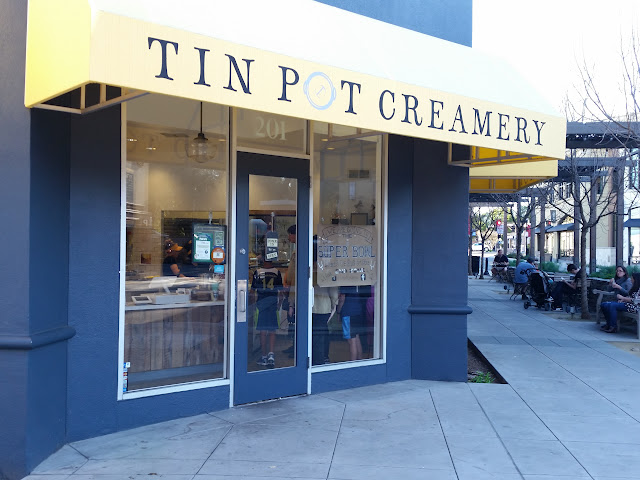