Using a gift certificate given to us by Jenny's brother (Thank you AK!) and a well timed birthday party, my wife and I sneaked off to The Village Pub for Sunday brunch, where we ordered off the menu.

The melon, which was our first course, was fine, though I thought it expensive for what it was ($13). On a good day, I can find a melon at the market that matches the quality of this one.

The halibut cake, on the other hand, was terrific and the highlight of the lunch. It was delicate and went well with the runny egg. It made me say, "Wow", even on the second and third bites. It was one of Jenny's favorites, too.


The Village Pub also scored well with the ricotta cheese and Meyer lemon pancakes. It'll be hard to eat from a mix from now on (which was never an issue before). The creaminess from the ricotta really stood out.

In addition to the halibut, Jenny most enjoyed the breads, which at $6 was a relative steal. The fluffy and flavorful little bricks went well with the housemade spreads and jam. I liked the lemon the most.
They were out of shrimp for the shrimp and grits, so they replaced it with lobster and didn't change the price ($18). It was good and savory, but I thought the grits drowned out the lobster.


Service was efficient, though it was more of the leave-you-alone approach rather than doting. Unfortunately, despite all that we ordered, we weren't full when we left.

Scoring a date night thanks to a birthday party, Jenny and I went to have Japanese tapas in Mountain View last Friday. I visited the other restaurant in this chain back in 2008 and I remembered the rice cakes to be wonderfully crunchy. So, this time, we went with the rice cakes with salmon and salmon mayo. They were good, but the salmon was essentially there just for flavoring. 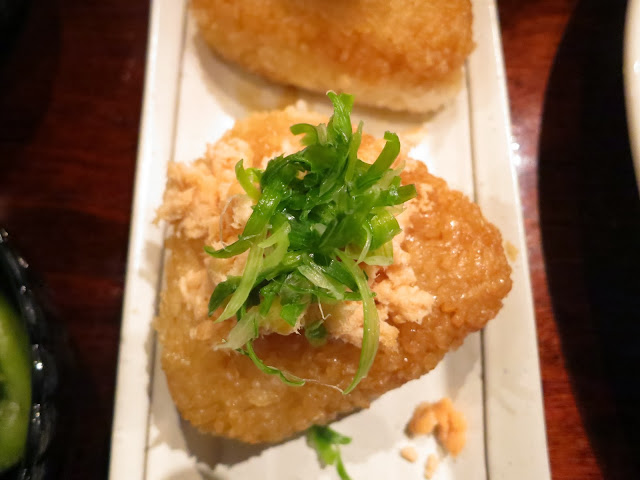 The pork rice pot was probably the best dish of the night. A runny egg was thrown in for some flavor. and our server mixed it at the table. It was a tad heavy but scrumptious and, again, had that delicious crunchy burnt rice. 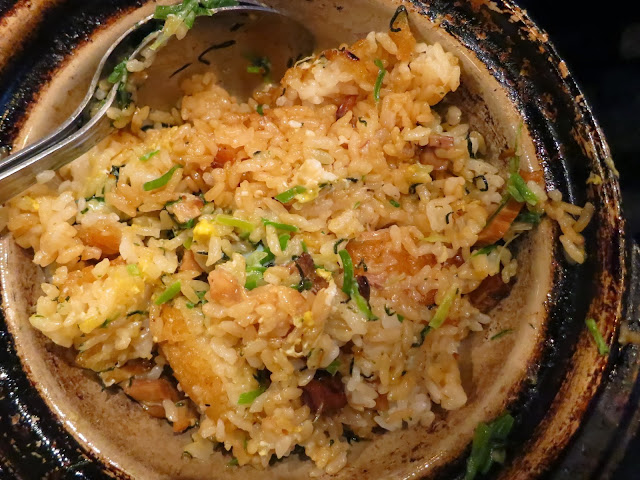 The tomatoes with scallops looked good--the dish was a work of art. The tomatoes were super-juicy, too. However, the concoction was difficult to handle with chopsticks. 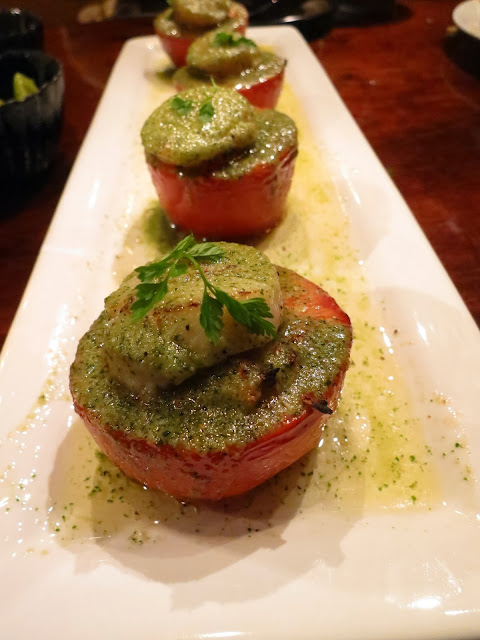 The cod, which was tender, could have been served on a smaller platter. What intrigued us most was the flavor. I thought it was from lemon or other citrus, though Jenny thought it was the plum soy sauce. 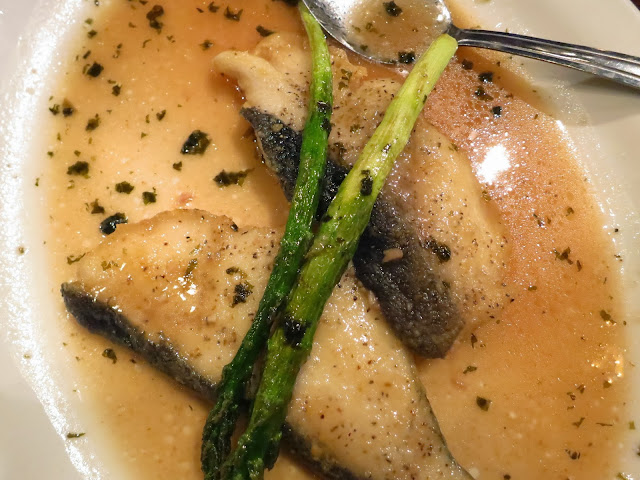 At $67 (including tax) with the above dishes plus a beer, we thought dinner was a bit expensive. But, the service was friendly and prompt. So much, so, in fact we got got a free bowl of edamame because we were told the food would take longer than expected. In fact, it came in less than 15 minutes. If only other restaurants could hold themselves to such a high standard of service. The restaurant opens at 6:00. At 6:30 there was plenty of seating. At 7:00, though, the restaurant was full. 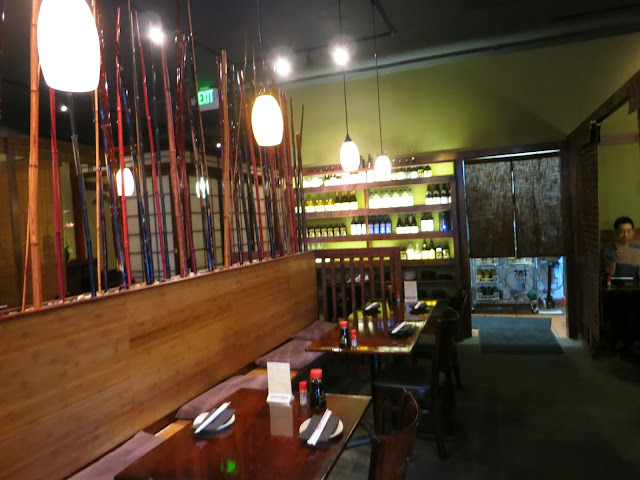 
It's pretty clear when you walk into this charming home of a restaurant that this is a family run operation. Occupying the former Bonjour Crepes (the sign is still up), this restaurant specializes in Mediterranean food. However, they embraced the French identity of the former restaurant with artwork on the wall evoking France (like that of the Eiffel Tower) and they played an accordion track with La Vie En Rose and C'est Si Bon. How could we think we were anywhere but France? 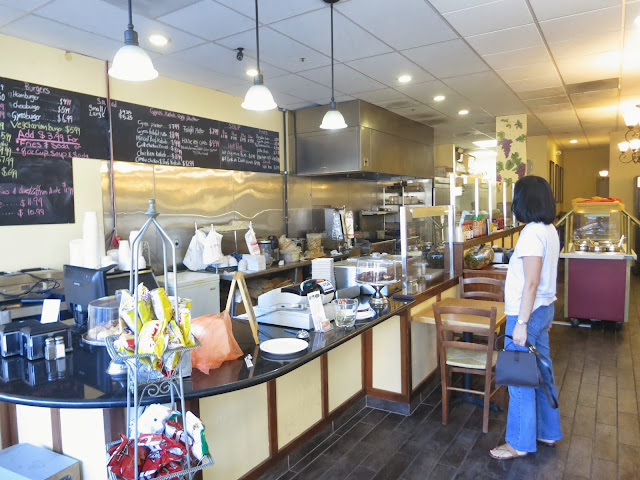 The soups came in interesting flavors and you can tell they're homemade. The woman behind the register let us sample each creation. Some comments:
Pommegranite: A bit strong for me. If sour is your thing, give it a try.
Beef and Barley: Just the right amount of heartiness and thickness. So often this is made too weighty and gloppy, but not this one. It was my favorite of the bunch.
Yogurt Drink: Was a little sour as one might expect. It came with spinach.
Five mushroom: Creamy and savory. This is the one we chose to get a bowl of. It'll be hard to ever go back to Campbell's Cream of Mushroom.
Mexican Lentl with lime and avocado: Watch out for this one. It's spicy.

One of our entrees was the Combo Chicken and Beef Kabob. I enjoyed the beef, which was tender and a tad greasy (which is good!), though Jenny thought you can get the beef elsewhere. 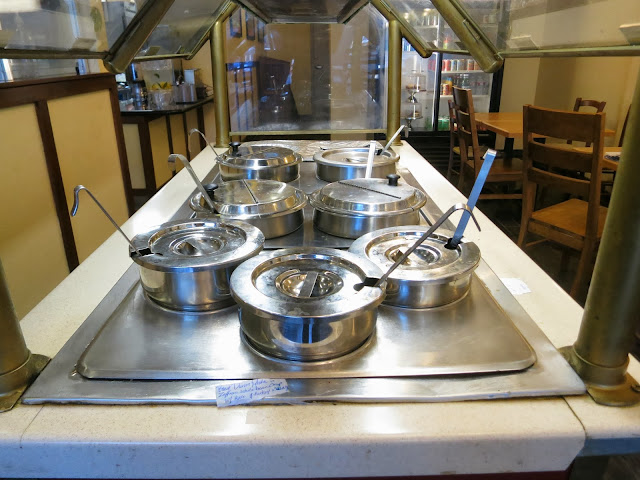 The gyros platter was delicious and filling. Jenny and I agreed the best part of both dishes was the gyro, which was tender and flavorful. It makes us think that the Gyro on a Pita for $4.59 is a steal. The falafel was fresh, crisp and hot. The woman who made them even gave us a couple on the house since they were just made. I was told the vibrant green color came from parsley and cilantro. 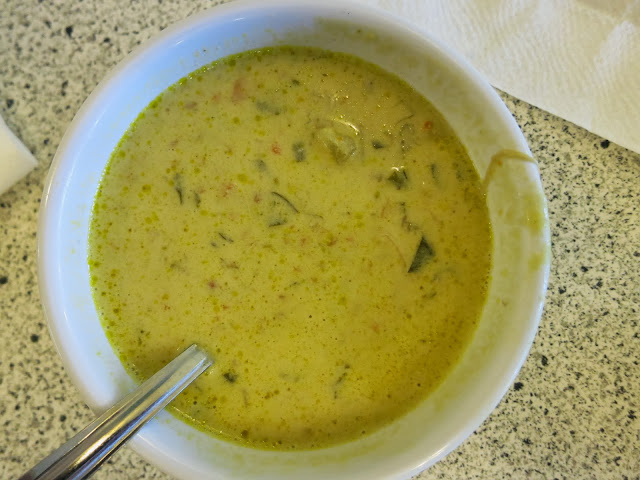 My advice? Get here at 5:30 on a weekday when it isn't crowded and let this family take care of you. 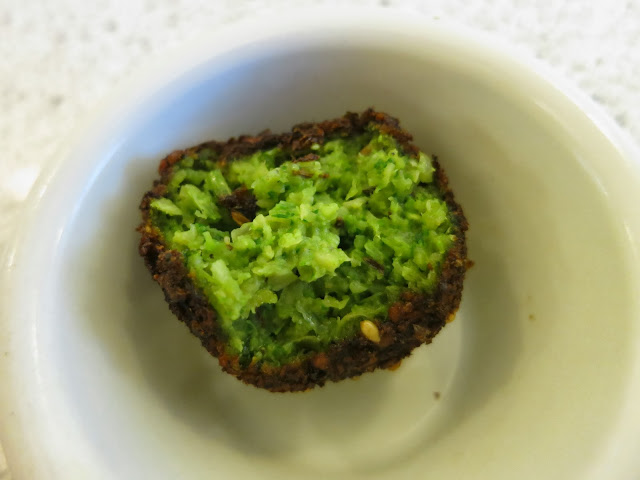 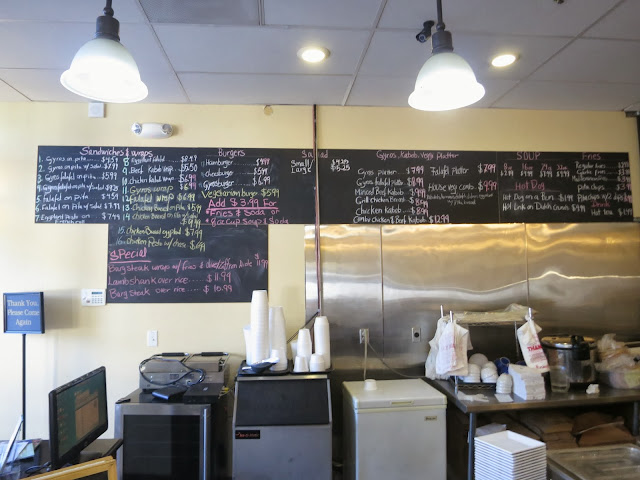