We ate at Huge Tree Pastry in Monterey Park for brunch this morning. It's a no frills, order-as-you-go restaurant focusing on smaller items such as pastries, soy milk and even xiao lung bao. I found it best to stick with the breakfast items here. The you tiao (Taiwanese donut on the menu), is served hot, crisp and, in the inside, soft. It went well with the soybean milk, which we got "sweet" (you'll need to add sugar to make it actually taste sweet). 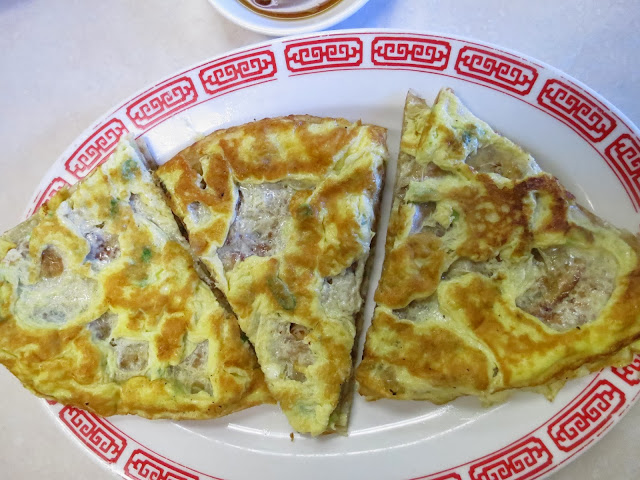 Probably the favorite dish at the table was the baked sesame bread with egg--basically an egg sandwich. The other egg dish we got, the pan fried green onion pancake with egg, also hit the spot. 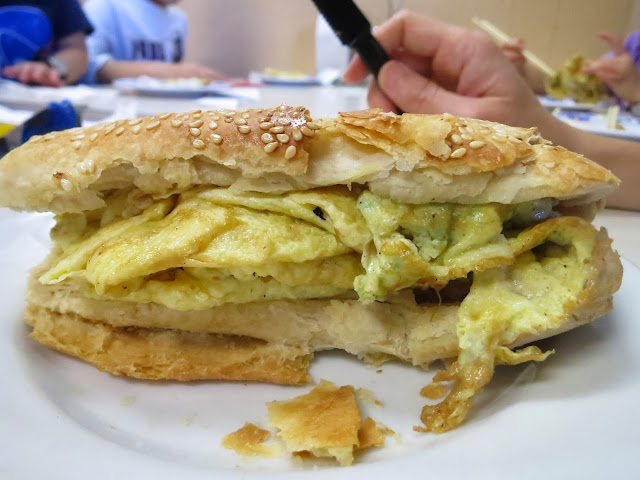 Perhaps the heartiest single item we got was the baked sesame bread with beef. It wasn't anything elaborate, but it came early in the meal, when we were pretty hungry. So, it was well received. 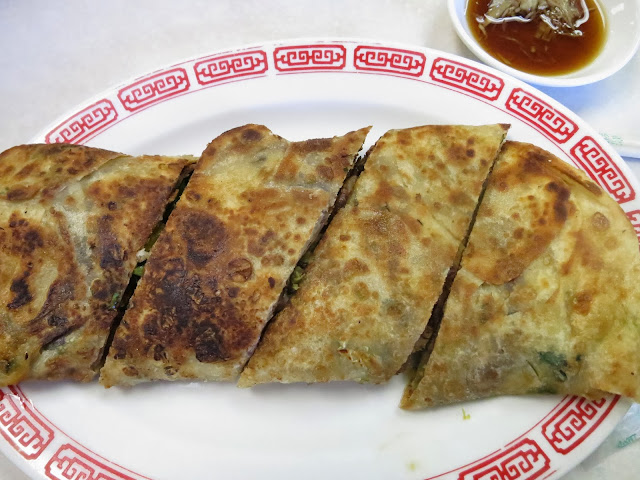 Other items we got include the ham and radish pastry, which was exceedingly small (not much larger in diameter than a silver dollar) and a salty fan tuan, which was a roll with pork sung. 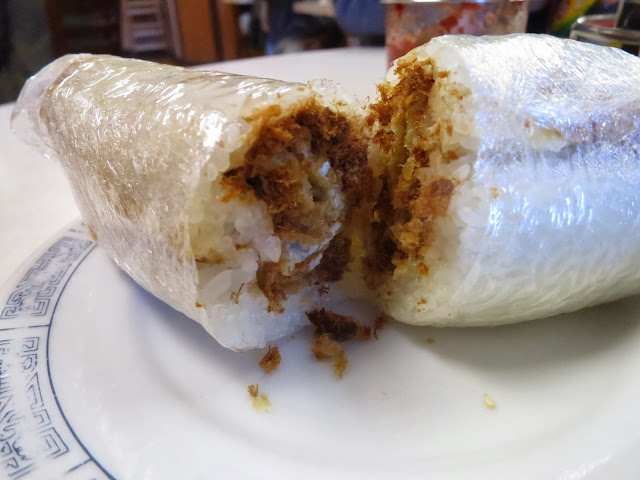 I was slightly disappointed by the xiao lung bao, which I found to be leaky and the skin a little tough. It's hard to do this well and it's hard to blame the restaurant for its effort. 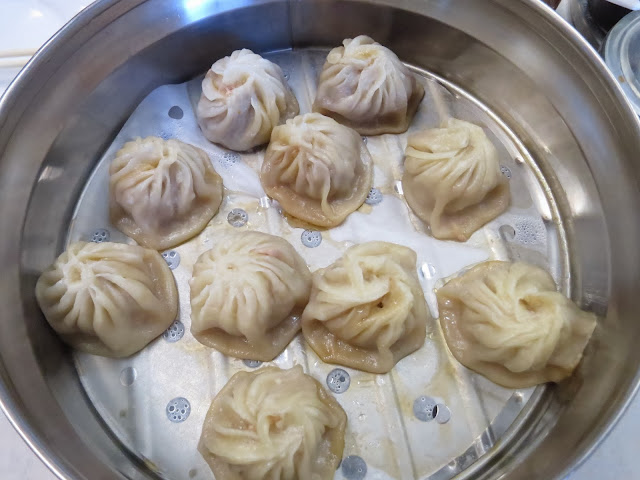 While Huge Tree was hit and miss, I don't question its value. We ordered nine items in all and with tax and tip the eight of us were fed for $44. Again, if you go here, stick with the meat- and egg-filled pastries and maybe the soy milk.

Note: The men's restroom had no soap and no paper towels. 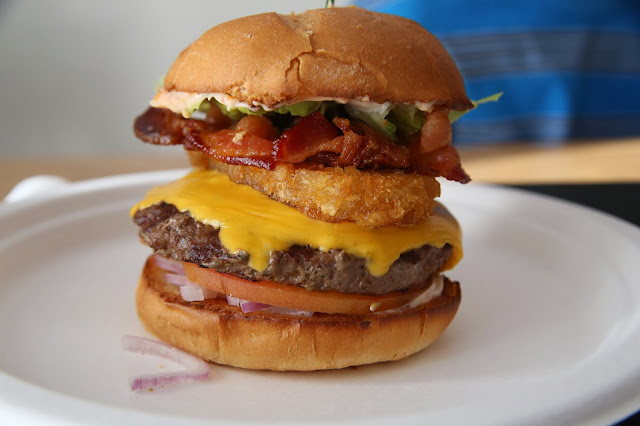 I had my first-ever burger with hash hash browns today (the "Ultimate Burger"; see photo above) and must say I was very pleasantly amazed. If there's one thing that must be said about Tony's Kitchen it's that the food comes out fresh and hot. The hash brown patty was super crisp, yet warm and fluffy inside. If the burger looks like a heart condition on a plate, it sort of is. Just dance or go for a jog afterwards and call it good. It'll be worth it. 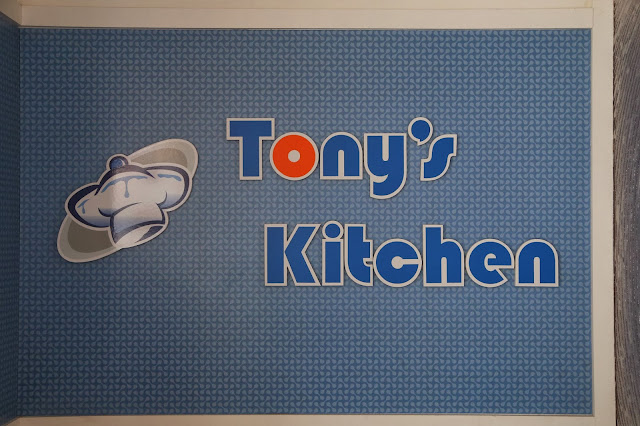 My wife opted for the mushroom burger. She liked that the mushrooms were fresh (she's good at telling stuff like that). 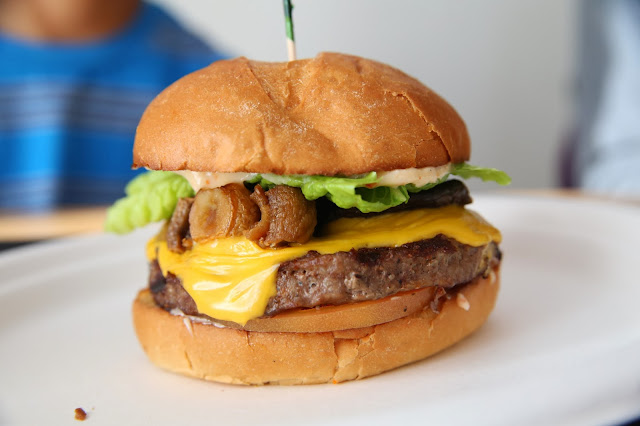 The kids shared fish and chips (the big ticket item at $10.99), which came with three fillets and fries. As you'd expect, the fish came in a crisp batter and was good and flaky inside. 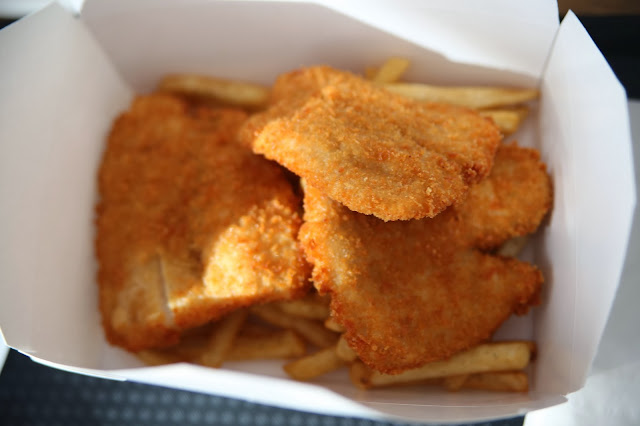 To get a good deal on the Ultimate Burger, go to Tony's on a Monday and get it for $6. Go Wednesday and you can get a gelato for $1. Friday, $5 gets you the pulled pork sandwich. Whenever you go, you don't have to worry about a wait. They'll fit you in and fill you up. 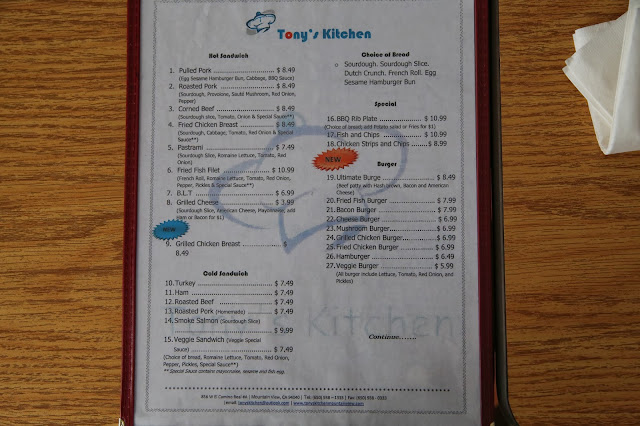 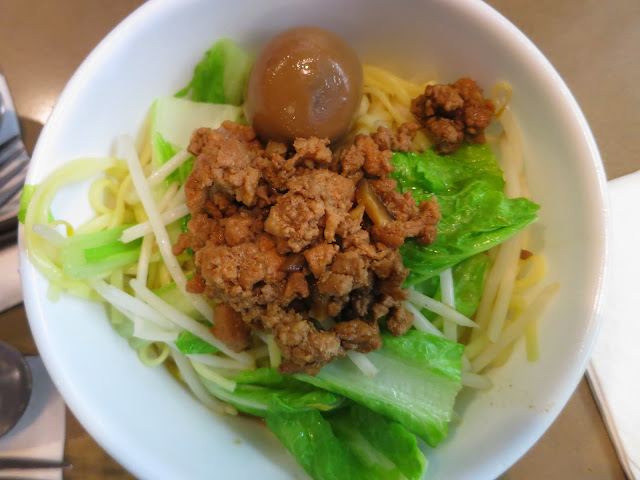 We went to Ocha Tea Cafe for lunch today. Jenny shared the stewed ground pork and mushroom (above, with "dry noodle"). Tyler, who had portions of all the dishes we ordered, liked this one the best. The noodles were just right and the dish wasn't too salty. Of all things, I liked the lettuce, which was crisp. 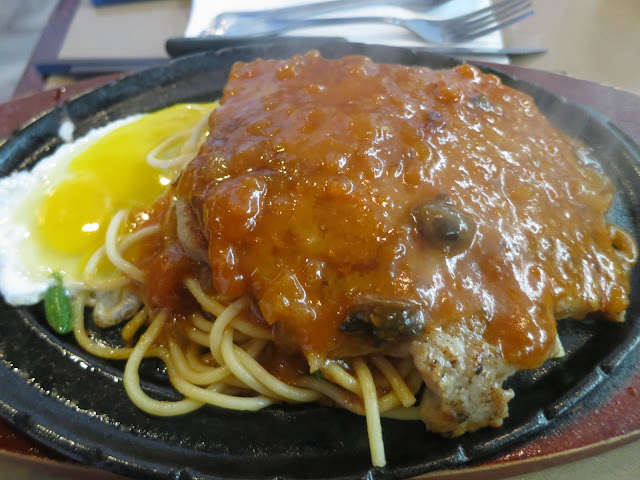 I ordered the pork chop (above) sizzling plate and it was my favorite of the three. It comes with a raw egg you'll need to scramble before the plate cools. The chop is boneless and pretty thin (1 cm. maybe?). It's incredibly tender and the sauce on top goes with just about anything savory, like the fried rice below. I really liked the shrimp. 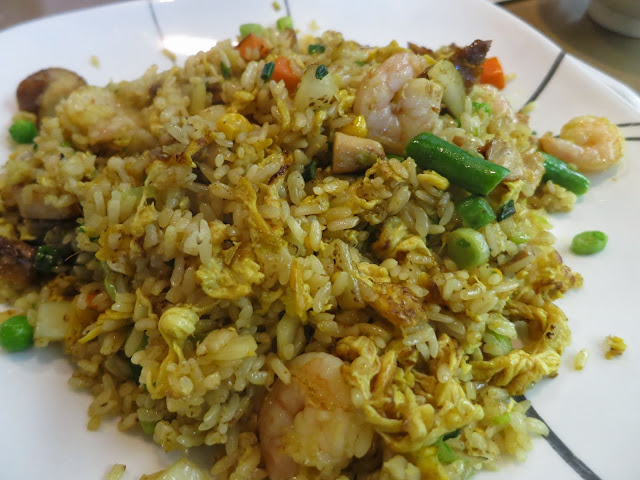 We usually don't order drinks when we eat out, but this time we got three and enjoyed all of them. We got a cold mango milk tea and a peach oolong milk tea. What I liked most, though, was the taro snow (below). The flavor was fantastic, with the taro really standing out. It wasn't much of a thirst quencher, though, as it had the consistency of a slushy. 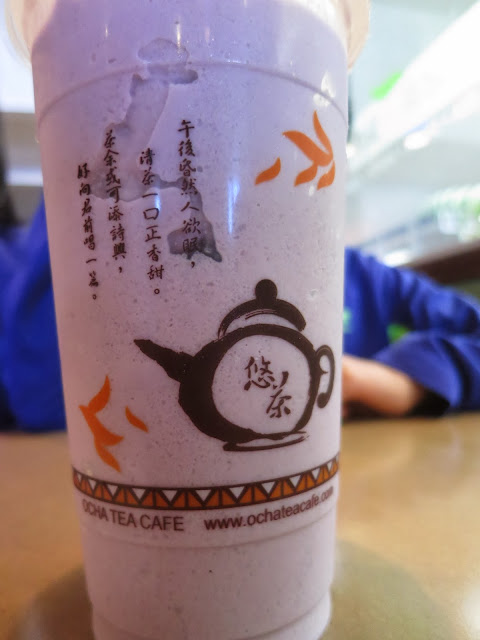 Before tip, the lunch was a hair less than $40 after tax but before tip. The three drinks were $3.50 each. (Menu below)

The kids liked Ocha and I liked that it wasn't that crowded. We'll go again, but I wouldn't characterize this Ocha as a go-to in a pinch. At this mall at least, for emergency dinner pickup I'd go with the value play in Sushi 85's teriyaki chicken.

Saturday my dad took us to Shanghai Dumpling, which we passed by when we ate at QQ a little more than three weeks ago. 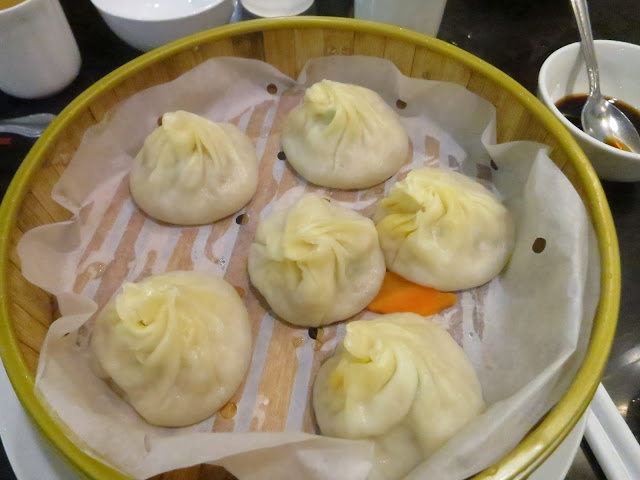 We got the obligatory xiao lung bao, which the boys loved. Though slightly bigger than what's often found elsewhere, they were nevertheless juicy, hot and the skin held its own. Tyler, a 3rd grader, scarfed down four and loved each one. 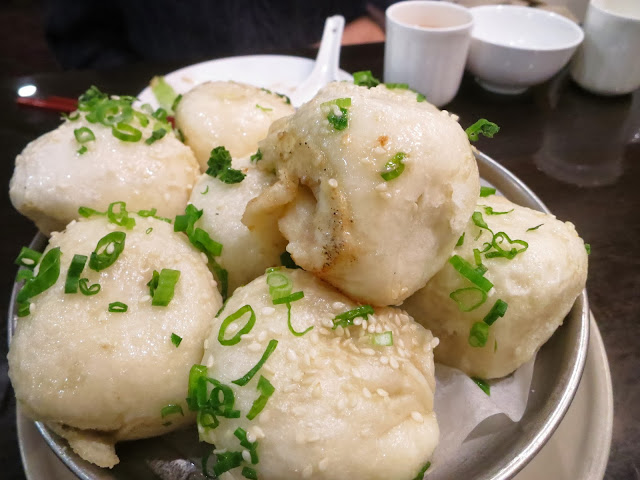 The pan fried Shanghai pan fried bun stuffed with pork was delicious. The bun was pillow soft and perhaps a little sweet. My dad, who was raised in Shanghai, commented the pan fried buns were about as authentic as he's seen among the dozen or so Shanghainese restaurants he's tried in the Bay Area. 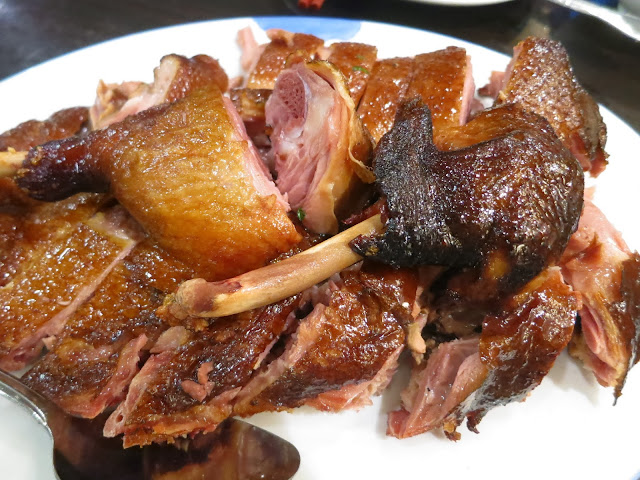 The most pleasant surprise was the smoked duck. It was fall-off-the-bone tender with a strong flavor. I can't wait to get it again! 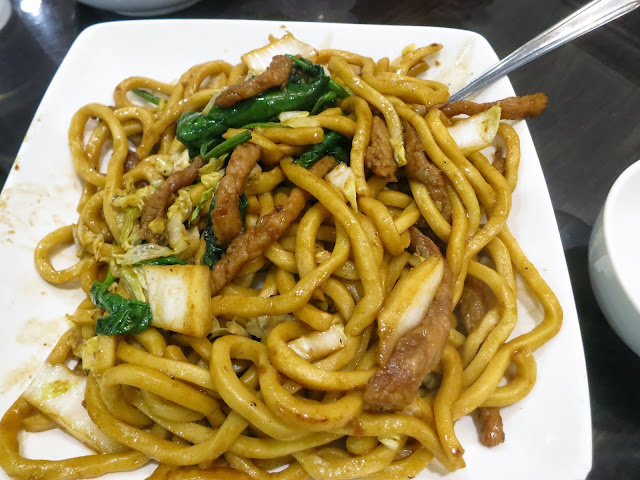 To satisfy the kids' need for pasta, we got the Shanghai Noodles, a dish that was widely popular at our table. No surprises, but very good. 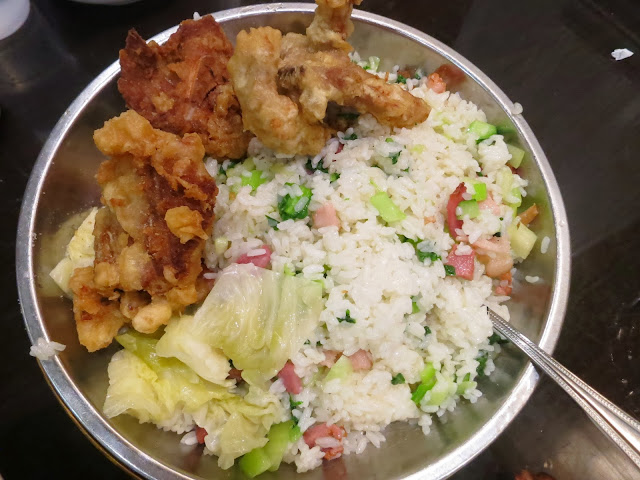 The pork chop over rice was good, but largely because of the salted fatty pork bits in the rice. I thought the fried chop was a little heavy with the batter (and that's saying something).
. 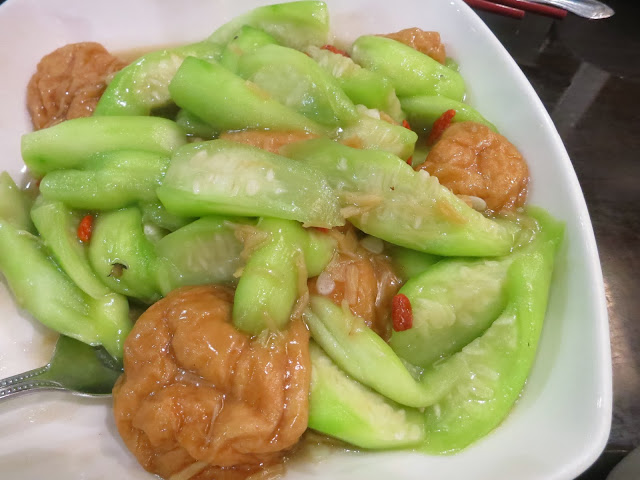 The gluten puffs were OK, but not as good as what you'd find at Shanghai Garden on Homestead. 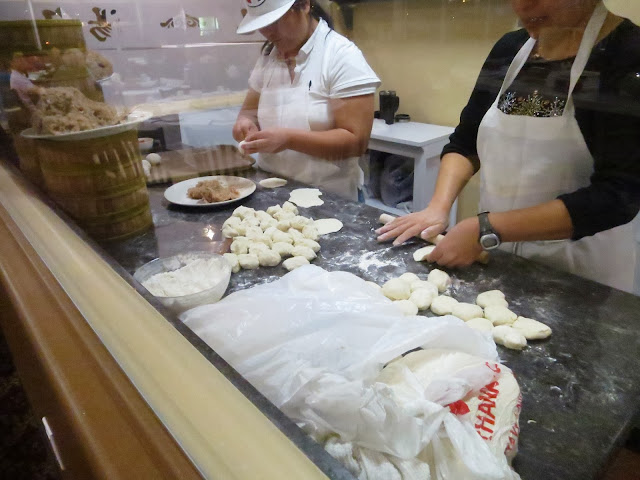 An internet search on Shanghai Dumpling will quickly reveal they charge 20 cents for water, which isn't necessarily a bad thing. At least the non-zero cost makes you think before asking for water.

With so many Shanghainese restaurants coming and going over the years around here, I really hope this one makes it. You can come by at just about any time and there will probably be space for you. This restaurant does a tremendous amount of take-out business.