Yesterday my coworkers and I met at the Biltmore Hotel and Suites for our holiday event. With "murder on the menu",we were treated to a murder mystery, complete with professional actors. Thankfully, the actual menu for our lunch was anything but deadly. Because this was an event for seventy, we were limited to three choices for our entrees: vegetarian, chicken and beef. I went with the London Broil. 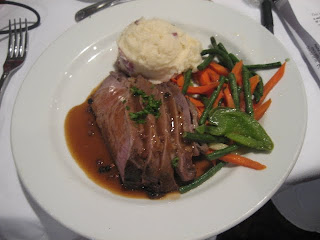 With my cut well marbled and substantial, I was delighted with my choice of meat, which was more notable for its texture than flavor. The sauce was appropriately gentle and didn't drown out the subtle flavor of the beef. The mashed potatoes hit the mark and I appreciated that they were served skin-on. The vegetables, mostly beans and carrots, were crisp and flavorful thanks to an ample dose of oil. I would have been happy to make a meal out of them. 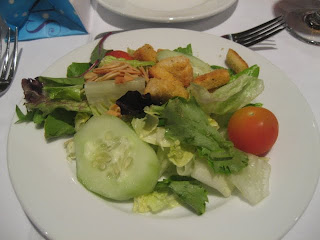 The cheesecake was delicious. How can one really miss that badly, after all? It was creamy and topped with chopped walnuts and chocolate chips, which combined to overwhelm any flavor the cake itself may have had. But, that was OK by me! 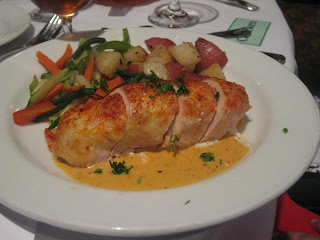 I have two side notes. First, neighbors at my table who had the chicken breast all cleaned up and told me it was tender. Second, the iced tea had a floral fragrance to it, which wasn't at all offputting, but nevertheless unusual. 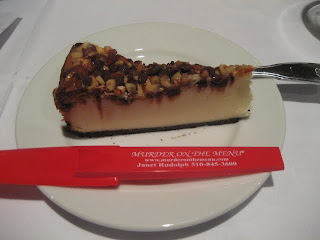 I found that it was for good reason that the Bilmore is a popular choice for my company's events such as retirement parties. You'd be limited to one of the Biltmore's two restaurants depending on when you're eating. Breakfast and lunch are served at Montague's Cafe, while dinner is served at Hops Bar and Grill. Our event was held at the latter, as it was lunch for a private party. The venue was a little dark but otherwise ideal.