Although it had been nearly a year since we moved to our current home, it wasn't until yesterday that I celebrated the purchase with our agent. Following his suggestion, we met at Chef Chu's, which I last visited almost ten years ago. Back then, it was a profoundly Americanized Chinese restaurant, missing only egg foo young on the menu and a pagoda on the roof. From the menu you chose an appetizer from Column A and a main dish from Column B. 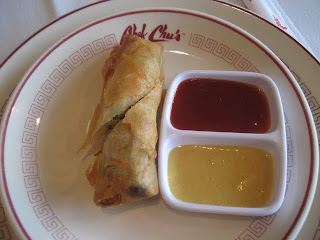 Given that background, yesterday's visit was a pleasant surprise. The restaurant decor has been tastefully updated and the menu no longer caters to the chop suey crowd. Yesterday, there were even some native Chinese speakers among the clientele, giving the restaurant an air of legitimacy. 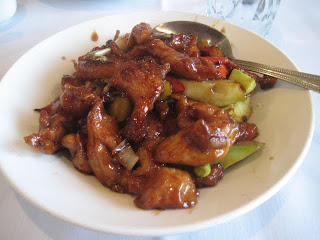 For lunch we ordered Hunan chicken and Mongolian beef. Lunch menu entrees include either an egg roll (which I got) or a soup of the day. Though hot and crisp the egg roll was on the skimpy side and virtually flavorless on its own, making the accompanying condiments (sweet and sour sauce and mustard) a must. 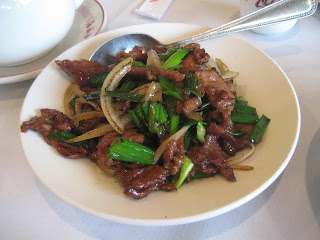 Both dishes were served hot, well flavored and in less than ten minutes after ordering. With a red pepper symbol next to the Hunan chicken on the menu, I was led me to believe the dish would be spicy, but it wasn't. Though a high proportion of each dish was meat, I still left lunch hungry since the portions were small.

Service was speedy, but catching a server can be difficult, especially during the lunch hour. We wanted a fresh pot of tea and it came in less than two minutes. But, flagging down a waiter took more than ten minutes. Be aggressive in getting help. As with many Chinese restaurants, servers at Chef Chu's will avoid eye contact, so be a little vocal.