Although prime rib is considered a traditional cut of meat for Christmas dinner, it wasn't until tonight that we prepared it for the first time, Christmas or not. My wife's co-worker forwarded her a recipe that came highly acclaimed. As stated on the Food Network website, the aforementioned recipe for Foolproof Standing Rib Roast goes like this:

Let roast stand at room temperature for at least an hour.
Rub seasoning all over roast
Place roast on a rack in a pan with fatty side up 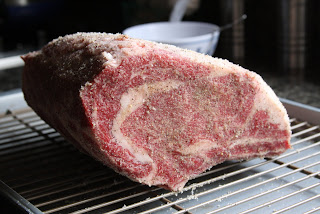 For what follows, the oven door should be closed from when the roast is put into the oven until it is ready to be served:
Roast for an hour, then turn off oven
Leave roast in oven for three hours with door closed
About one hour before serving, turn oven to 375 F to reheat the roast

We diverged from the recipe in two ways. For us, the reheat step was a little less than half an hour, at which time the sizzling prompted us to turn the dial to "Off". Also, the 1 1/2 cups of seasoning (to which we added some rosemary for color) we found to be far more than what we actually needed, which was about one-eighth that. So, you can divide the portions of salt, garlic powder and black pepper by four or even eight and you should be fine with a five pound roast--ours was five and a half. 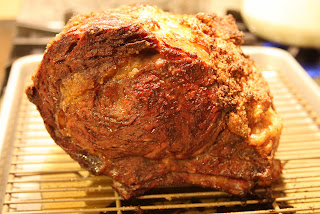 In the end, the seasoning formed a salt-heavy but tasty crust on the ribs. It also provided that saliferous bite that goes so well with tender prime rib. As for the cut itself, I strongly advise you make this "Foolproof" recipe even more so by getting yourself a well marbled Prime cut, as opposed to Choice. As it did for us, your roast will come out with all parts tender and juicy. 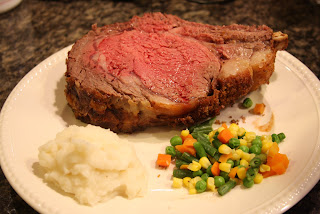 Before tonight, I was resigned to putting up with the chewy portion of the cut in order to enjoy that tender, dark exterior portion of the rib. However, this recipe, so elegant in its simplicity yet so devastatingly delicious in its result, can make anyone come off as an expert chef. One great side benefit of this method is that after the roughly four and a half hours of preparation, the wonderful essence of prime rib will reach every remote corner of your home--what's not to love about that?
Posted by Loren at 9:48 PM