The only reason we don't eat at Dia De Pesca more often (we go only about once every year or so) is that it's twenty minutes away from home. Last weekend we checked out a swim school for the boys in San Jose. Proximity to the pool made Dia De Pesca a most welcome option for dinner. I'd long thought Dia De Pesca's fish tacos among the best anywhere. What I learned with this trip, though, is Dia De Pesca can also be an extraordinary value. 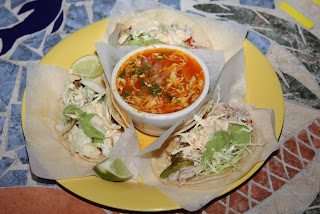 I ordered the special ($7.95), which came with three tacos and a cup of chicken hominy soup. The tacos were served hot and with a green sauce--probably avocado-based--that added a creamy texture and enhanced the flavor of every bite. The crab taco was outstanding, especially because of the generous quantity of sweet tender meat. When I dropped some crab on the table I still scooped it up and chowed it down, overcoming for a moment my notorious obsession with food cleanliness. 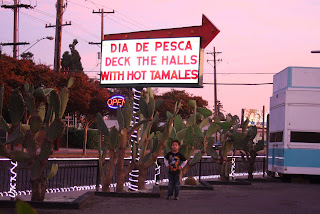 The other two tacos, while not as delicious as the crab, were nevertheless scrumptious. The red snapper was firm with a mild flavor, with the taco's taste overall carried by the slightly tangy sauce that went with it. The tilapia was tender and even a little juicy. As with the other two tacos, there was no skimping on the meat. My cup of chicken hominy soup was served lukewarm and there wasn't a lot of chicken though it was packed with hominy.

We got chicken quesadillas for the twins and, despite their ever-increasing appetites, one order was more than enough for both of them. So, all told, we spent $28, before tip, for six tacos (Jenny got three regulars, which made her every bit as blissful as I), a cup of soup and a quesadilla loaded with meat. In other words, it was less than $30 for a delicious meal the four of us could only barely finish (though I did manage to clean up the twins' scraps), making it well worth a forty minute round trip, even without swimming lessons.

Also of note: Indoor seating is available but outdoor seating is more fun. Note the tiled artwork on the patio furniture. The small parking lot fills up before 6:00 on a weekend night. Dia De Pesca accepts cash only.