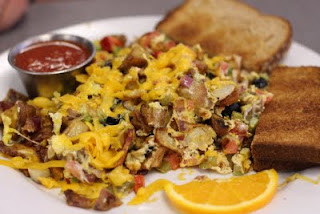 Last Friday I met Jenny for lunch at Baji's Down the Street Cafe in Mountain View. I got the "Baji's Down the Street Cafe" from the omelet section, though it was actually an egg scramble. The dish had a vague list of ingredients "...everything but the kitchen sink...I dare you to order it!", said the menu. The kitchen sink and avocados, apparently. I asked if it came with avocado. "No", I was told, "but we can add some." What I wasn't told is the avocado would cost another dollar, making it $10.75 for a two-egg scramble. Yikes! Overall, the "omelet" was good, but a bit of a mishmash, almost as if it was made up of random scraps left over from other omelets. Unfortunately, this mishmash that wasn't all that filling. Included were diced jalapeno peppers, though, which gave lunch a good kick. 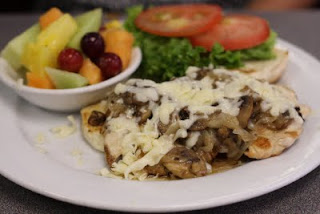 With Jenny's Chicken KO, she got fruit instead of fries, which cost an additional 75 cents. She liked the sandwich, though it was messy, hard to handle and required a fork to eat it. What stuck out, though, was the dish, with the fruit substitution, was $10.50.

I find it hard to imagine I'd return here, though Baji's has no shortage of customers. Lunch was expensive and it was a lunch I could make at home. And, I left hungry. Baji's nickel and dimed us on substitutions and additions without saying a word when we ordered. Most importantly, if we're paying top dollar for their omelets, can they at least use three eggs like everyone else?