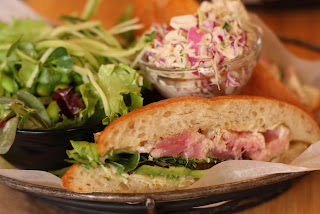 Our search for furniture for our family room took us to San Francisco Monday. Close to the sofa store was Pacific Catch, where we dropped by for lunch. The soft yet chewy bread and the tangy mayo made all the difference in my wasabi ahi sandwich. The tuna was pink instead of the dark red we were used to and it tasted a little like chicken. But, this didn't seem to matter. I opted for the salad instead of fries and was happy with the choice. The salad was fresh, very green and was topped with soybeans, which added a delightful crunch. 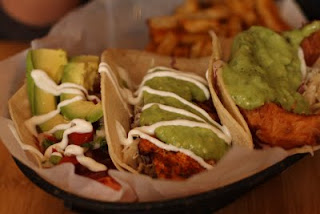 Jenny had the three fish tacos. Her favorite was the crispy fish, which was topped by a spicy sauce that wasn't overwhelming but had bite nevertheless. The ono was overdone and the barbecue salmon was above average. Her spicy fries were crisp and, yes, spicy, but not overly so.

A new Pacific Catch is rumored to be opening in Campbell. It'll be good to have a spot relatively nearby that satisfies that need for seafood, which almost always pops up spontaneously, whenever it comes.
Pacific Catch
2027 Chestnut St
(between Fillmore St & Mallorca Way)
San Francisco, CA 94123
(415) 440-1950
www.pacificcatch.com
Posted by Loren at 9:33 PM