Our boiling-soup festival continued today, this time at Tofu house, which I reviewed in 2010 without photos. Today, Jenny went with our standby, the #1: Original Tofu Soup, selecting beef (one could have ordered pork or chicken instead) with a medium level of heat. Silly me thought the Combination Tofu Soup, Number 2 on the menu, featured a mix of different kinds of tofu. I was disabused of that notion when I ordered it, finding out the variety was in the meats (shrimp, beef and clam) not in the bean curd. (In my defense, the brown tofu I had at Wu Ji's Mala House in San Jose the week before was different, at least in appearance, from the white curd given to Jenny.) 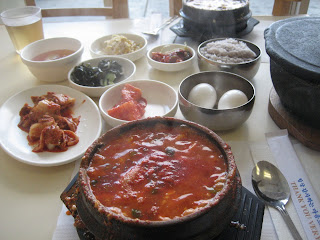 Just before our soups arrived, a pot of rice came to our table. After our server filled a small metal bowl with rice for each of us, he poured water into the pot, allowing us to scrape the rice from the pot toward the end of lunch. The sauces for the banchan, including the kimcheee, went well with the watery rice. The flavor had a subtle resemblance to barbecue sauce--both spicy and sweet. Not only did I end up finishing the banchan, I ended up dumping any remaining sauce into the rice to enjoy more of that terrific flavoring. As for the main event, Jenny thought her broth weak and I saw that her bowl was lacking in beef. The same could be said for mine as well, though there were several clams (both with and without shells) and two unpeeled, head-on shrimp. I ordered mine "Hot" (the restaurant's hottest) and fully agree it was less spicy than a "two" at Wu Ji's. 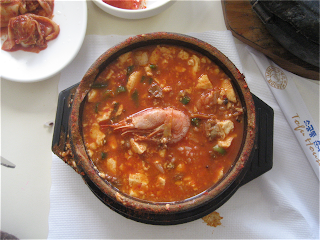 I concur with Jenny's observation that Tofu House skimped on the meat today. However, the main purpose of my trip was to warm up with a boiling hot spicy soup and Tofu House served that function well, as it always does. That said, I won't get anything involving shrimp at Tofu House in the future. Peeling those little guys is a messy affair that will turn your fingers red at best and splatter your clothes at worst. I should say it was a pleasure to meet again that avuncular proprietor, who was so delighted to see us he gave Jenny a pack of melon gum as we left.