Yesterday afternoon the 2011 Silicon Valley International Auto Show brought us to downtown San Jose. A ten minute walk from the San Jose Convention Center, home of the show, is Ruffled Feathers, a restaurant featuring wraps, pasta, pizza and rotisserie chicken. Given the name of the restaurant, I thought it appropriate to get a bird. I went with the 1/2 rotisserie chicken since, at $8.99, it was only three dollars more than a quarter. Their rotisserie chicken could be served in four different ways: Gilroy Garlic, Rosemary Herb, Smoked BBQ and Traditional. I chose the Smoked BBQ because I thought it would be the flavor most different from that of the rotisserie chicken I often get at Costco. So, it was ironic that the Costco chicken was about all I could think of as I ate at Ruffled Feathers. 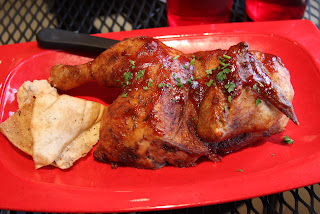 Why? Because I was paying nine dollars for half a chicken with some barbecue sauce on it (with none on the side), whereas I could get an entire bird for five dollars at Costco. And, use the extra four dollars to get all the barbecue sauce I can handle. Yes, the chicken was moist and tender (though Jenny thought it undersalted) and yes the skin was crisp, but nine dollars? All that came along for the ride were two chips and a dab of hummus. 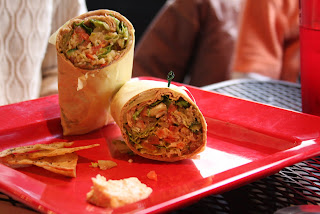 Jenny's wrap met her expectations, but it was unremarkable. The wrap was essentially a salad inside a tortilla--and tasted as such. Such a concept may appeal to some, just not me. So, given the mediocre performance for the adults, Jenny and I were all the more impressed by the Pesto, Pasta and Peas we got for one of the boys. Rich with olive oil and basil, the smooth pasta was delicious and some shaved almonds were even thrown in for some crunch. The younger twin had to fend off both me and Jenny as we raided his pasta with our forks. Not even a morsel was left behind. 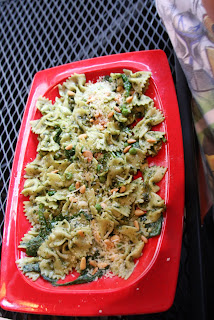 Motivated by the array of desserts available, we ordered a chocolate fondue to wrap up lunch. Amazingly, the dessert took nearly a third of a man-hour to prepare. The cashier spent about ten minutes procuring and cutting the fruit, while our server spent almost as long preparing the chocolate dip. Taking account the effort they undertook as well as the fun the twins had in finding different ways to polish off the chocolate, the dessert was a steal at $5.45 with tax. 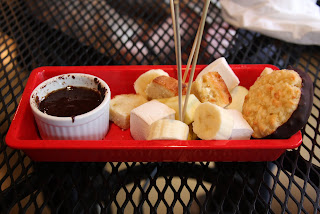 Though we won't make a special trip to the Ruffled Feathers Eatery, its convenience will bring us back if we're in downtown San Jose. The restaurant is only a block away from the garage on 2nd and San Carlos, where one can park free on the weekends.