Two or three doors down from Sui Tofu was Honeyberrry, which, in the middle of this decidedly Asian mall, stood out with its Mexican cuisine. Though we'd had a delicious and filling Korean dinner Saturday night last weekend, we still had room for dessert. And, heeding the sign at Honeyberry, we decided on their honey bread, which was advertised as baked every 15 minutes. We must have dropped by at the end of a cycle, as we waited at least that long before being served. And, thanks to the ever-ravenous younger twin, the entire dessert vanished in three minutes. 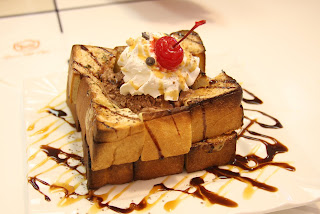 What little I could eat was good. The thick slices of bread used in the dessert reminded me of Texas toast. With the toast rich with butter and honey the shredded parsley was out of place visually--it added virtually no flavor amid the sea of sweet ingredients. The ice cream, which almost entirely fell victim to the aforementioned aggressive six-year old, complemented the warm, slightly crunchy toast. We chose hazelnut chocolate, though two other flavors were available including rocky road. 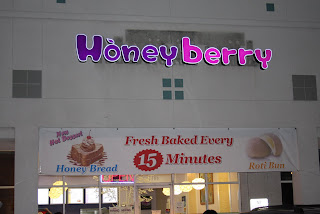 Having had a positive experience with the honey bread, Jenny and I couldn't help but wonder about the tacos and burritos at Honeyberry. And, with work less than ten minutes away, I'll have to drop by for lunch. Stay tuned!
Posted by Loren at 1:29 PM