Driving between my company's buildings during yesterday's lunch hour, I traced the arc known as Freedom Circle in Santa Clara. There I noticed a parked gourmet food truck featuring Japanese curry. Having had a cutlet with Japanese curry a couple of weeks before, I was anxious to compare. And, even better for me, there wasn't a line. According to the woman behind the register, the most popular item was their katsu curry. So, katsu curry with pork it was. 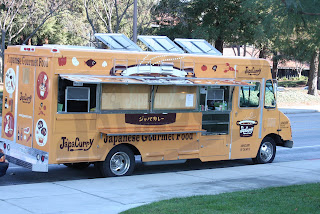 The sauce, which I ordered “Spicy”, was a notch tamer than the “Hot” at Tofu House earlier in the week but it still had fire. The cutlet was tender and I enjoyed every bite. Delightfully crisp and crunchy was the golden brown cutlet coating. Crunchy also, though thankfully not crisp, was the pickled ginger, which was slightly sweet and complemented the rest of the dish well. 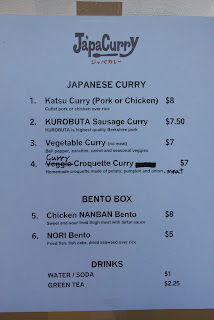 As for the all-important sauce, I was told it was slow cooked, and it was indeed quite smooth. However, it was lacking in vegetables. I detected chopped onions and maybe an occasional shred of bamboo shoot. However, JapaCurry would have done well to have added, say, some chunks of potato or carrots also. Such an addition would not only make it equally authentic, but it would help distinguish the sauce from instant curry-in-a-cube. More importantly, once you get used to melt-in-your-mouth carrots in your curry, it's hard to go back to anything else. 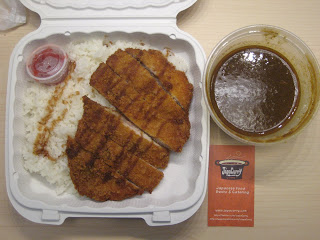 The quantity was slight, especially for $8. I still needed more to eat for lunch after finishing everything on the plate.