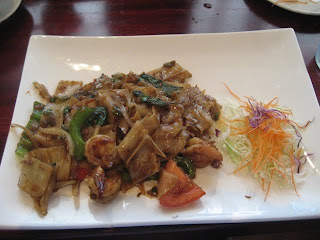 With Jenny in Santa Clara for an appointment Wednesday, we met at Thaibodia near the corner of Scott and El Camino Real. Wanting something to prevent me from gorging to quickly, I ordered the spicy noodles "hot" with shrimp. Despite the spiciness--it was indeed on fire--I could still taste the slightly sweet flavor of the sauce. I could have had the dish with shrimp, beef, pork or chicken, but chose shrimp because they didn't charge extra for this option. But, as with my wife's, my plate came with just four shrimp.

Jenny's dish was over-sauced and came out soupy. The restaurant was loud and she would have liked to eat at one of the far quieter Thai options on Castro. Moreover, neither of us thought our lunch particularly distinctive. Both of us left thinking we ordered the wrong thing (how else to explain that it was so crowded?). However, I doubt we'll ever go back to find out for sure.

Of note: Thaibodia is that rare Asian restaurant that accepts American Express. Each of our entrees was $7, which included soup and a small salad.