It's funny how one thing causes another. Yesterday, a hole in my jeans prompted me to make a trip to Old Navy in San Jose to get a new pair. Since we were in the area, we tried Santouka Ramen in the nearby Mitsuwa Marketplace. And that, in turn, introduced me to fermented soybeans--a sight and taste I'd never experienced before and won't soon forget.

My wife and I each ordered the Ramen and Fermented Rice Bowl. Mine was salt flavored and Jenny's flavor was soy sauce. Even though we ordered the same combinations (but different flavors) the ingredients were slightly different. Topping my bowl (pictured below) was black fungus and Jenny's had the seaweed. All four of us truly enjoyed the ramen (the twins shared a bowl of soy sauce ramen). The pork was very tender in both bowls and my broth was flavorful, hot and creamy. I was quite thirsty shortly afterwards, though, suggesting the broth was high in sodium. 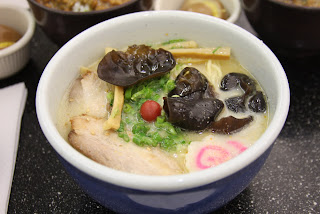 The fermented soybeans on rice were difficult to eat. They were slimy (below note the mucous strands hanging from the fork) and rendered my chopsticks permanently slippery. And, the consistency seemed to change with time, with the soybeans even bubbling near the end of lunch. To be fair, fermented soybeans, or "natto", are reputed to be healthy, loved by many and were once all the rage in Japan. However, they're not for everyone. 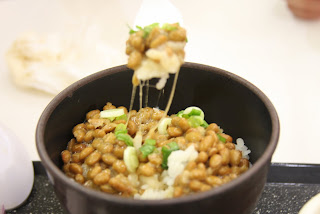 The food court at Santouka was crowded and I needed to clean my own table. Also, even well after 1:00 on a Sunday, the line was very long (at times more than twenty people for a single cash register). Making things worse was our cashier, who was very impatient, rudely drumming his pen loudly to show his disapproval that Jenny and I took more than a few seconds (but less than ten) to get our order straight.

Going to Santouka is asking for a stressful experience. It's stressful to find a parking spot in Mitsuwa's crowded lot, to stand in a long, makeshift line to order, to deal with a rude cashier, to find a table and to clean it. Why put yourself through this? Go to Orenchi instead, where food is brought to your clean table, the bowl of ramen is the same price as Santouka's, and both the broth and noodles taste better.
Posted by Loren at 5:35 PM