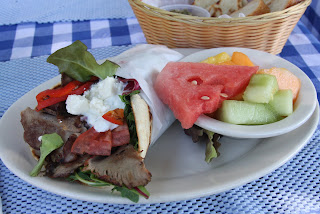 Those in my department at work choose Athena Grill in Santa Clara more than any other venue to celebrate welcomes, farewells and returns (I chose Athena Grill for my pre-sabbatical good-bye a few years ago). And, why not? The food has been predictably good and reasonably priced. Also, perhaps due to the dearth of Greek restaurants in the Santa Clara area, Greek cuisine prepared well around here never gets trite or boring for us. Conveniently, our often large groups have also had the flexibility to move tables together to suit our numbers.

I dropped by Athena Grill earlier this week to order up an Arnaki Pita, which features sliced lamb grilled with onion and roasted peppers. Providing an outstanding temperature contrast for this sandwich were the cold ingredients: spring greens, tomato, feta cheese and tsatziki. Although Athena provided a fair amount of lamb, the pita wasn't bursting throughout with meat as the photo might indicate. It must be said, though, that the lamb was tender and flavorful. The sauce, the tomatoes and the too-generous volume of bell peppers combined to have the pita leaking onto the plate when first handled. Moreover, the sheer thickness of the sandwich would prompt even the biggest mandible to open as wide as possible, forcing one to grab a full mouthful, resulting in a wet experience if not a drippy one. The feta was duly sharp and caused enough pucker in my mouth to stop me from eating lunch too quickly. Overall, I left full and satisfied. One difference maker was a big basket of bread, which included an olive-oil-based dip.

Over the eleven years I've eaten at Athena, this was my first experience alone. Indeed, it has been a while since I've eaten here. Our hiring freeze over the past four years has prevented welcome lunches and the current employment environment in the Bay Area has forced people to stay where they are, so there haven't been many farewells either. Nevertheless, Athena still packs them in, as it has a grip on the employees of its restaurant-starved industrial park. So, if you want a table, get there early (at 11:30) or get there late (after 1:00).