One tried and true piece of advice on how to grill a salmon fillet is to lay it flesh side down over direct medium heat. The slab is ready for flipping, so it's said, once the flesh loses its grip on the grill. One then grills skin side down for about half again as much time. For a standard fillet, such a recipe works exquisitely. But, what if the meat is more than an inch thick? The risk is either an underdone core or overcooked exterior. 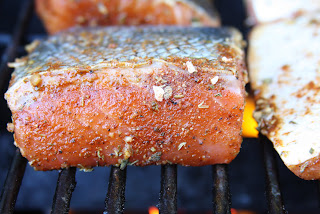 Sunday at the grill we tried a recipe ("Grilled Salmon with a Pineapple, Mango and Strawberry Salsa") from Emeril Lagasse as found on the Food Network website. A key difference, however, is that when it came to the actual grilling I deferred to Weber's Big Book of Grilling, the one book I would take with me to that proverbial island. But, since the Weber instructions were tailored for standard fillets, I needed to improvise. Here's one way to grill a thick slab of an inch or greater (and remember to close the grill for each step!):

(1) Grill with the flesh down on the grill over direct medium heat until the fillet no longer sticks to the grate. This will take anywhere from four to seven minutes, depending on your flame. Check every 90 seconds or so. Note the time for this step--it will govern timing for the following three steps.
(2) After the flesh slides cleanly off the grill, turn the salmon over so that the fillet is skin side down. The length of time for this step is the same as that for the flesh side down in the first step.
(3) Over low direct heat, flip the salmon back to flesh side down for half the time in Step (1)
(4) Again, over low direct heat, cook the salmon skin side down for until done--roughly the same amount of time as in (3).

The low heat in steps (3) and (4) allow the center of the fillet to be cooked without charring the exterior. Don't be afraid to cheat and check the salmon for doneness while it's on the grill. With a fork, pry open two neighboring flakes. If the salmon isn't yet flakey or if the flesh is at all translucent through the thickness, it'll need more time. Unless the undone portion is biased toward the surface of the flesh, the downside is lower by completing with skin side down. Why? Aesthetically, burned skin is forgiven much more easily than charred flesh. 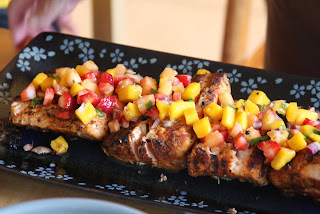 Emeril's recipe worked out well! I found the salsa to be more critical to the success of the dish than the "Emeril's Essence" or seasoning.