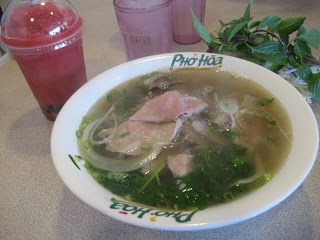 I met an former neighbor for lunch very close to where I used to live--and not far from where I currently work--at Pho Hua, which sits in a mall at the southeast corner of Lawrence and El Camino. I ordered a large bowl of the steak, flank and tendon. The steak was fatty and delicious. They offered a fair quantity, too. The flank was a little tough but flavorful.

There wasn't a lot of tendon in my soup by any means, but that's all forgiven due to the vermicelli. In many pho restaurants the noodles are a mere afterthought--a sideshow compared to the meat and broth. As such, often the noodles aren't given due care. In my experience, they usually clump together at the bottom of the bowl and turn out hard. At Pho Hua, however, the noodles were delightfully soft and swayed freely in the broth, each one assuming a life of its own rather than locked into the other noodles like a thick woven fabric.

I also got a strawberry tapioca smoothie. One lap around just about any mall featuring Asian food will reveal tapioca balls are commonly found in teas, cold or hot. But, just how do the squishy spheres fare in a smoothie? While it was flavorful and obvious that Pho Hua used fresh strawberries, the tapioca balls could be consumed through a straw for only the first few minutes. After that, they collapsed and stuck together under the weight and frigidity of the ice. I ended up needing to pop the cover off and dig into the tapioca--now a single cold brown mass--with a soup spoon.

If you're interested in pho, there are a number of suitors competing for your business in Santa Clara. I would have to say, though, that Pho Hua offers the best all-around pho in this stretch of El Camino and I look forward to a return, especially during the cold winter months.
Posted by Loren at 10:18 PM