Heading home on the 880 through Milpitas Sunday at dinnertime, the four of us stopped for a bite at the predominantly Chinese mall, anchored by a 99 Ranch, in Milpitas on Barber Lane. Short on time and unable to wait in line, we threw caution to the wind and tried the eerily empty (just two other tables were occupied despite a nearly full parking lot) Chez Mayflower. 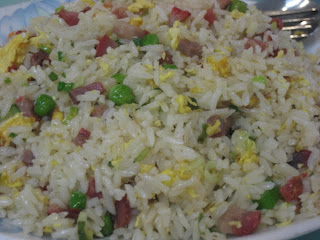 I ordered the fish congee, which over the past year or so has become a standby of mine. The bowl came piping hot and stuffed with tender fish--I counted six four-inch fillets. The flavor, however, was watered down compared to congee at, say, Joy Luck Bistro. Our younger twin loved the wonton noodle soup, especially the noodles. I ended up eating the wontons, which were fine, albeit oversized. 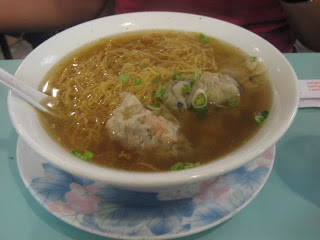 The fried rice packed a lot of shrimp and for eight dollars it was a good size--so good, in fact, that we were unable to finish.

We stopped at this restaurant out of convenience. There were many other options in this mall alone (and several more at the mall next door), but with Chez Mayflower we could get a table immediately. So, for what it was, a quick hit and run, Chez Mayflower served its purpose. I walked away not quite understanding why Chez Mayflower was so empty and the surrounding restaurants so full. Given the same set of rare circumstances (that is, in a hurry on the 880 at dinnertime), we could very well return.