Jenny and I met at World Wrapps at the Mercado Center in Santa Clara today. I tried Jenny's usual, the Samurai Salmon Bowl (below) while she got the Thai Chicken Bowl. 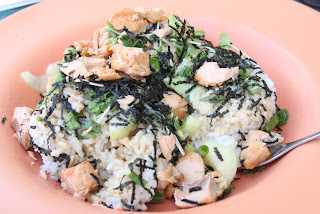 The salmon was a touch overdone, but the bowl was otherwise a joy to eat. World Wrapps mixed in the right amount of wasabi--enough to make the meal punchy and interesting but not enough to hurt. Also, the sauce had a delicious creaminess about it that went exceedingly well with rice. The seaweed, or nori, provided crunch as well as flavor. The avocado was a nice touch but not critical. The bowl was served lukewarm and would have been even better served hot. As with all World Wrapps bowls, this dish can be ordered as a burrito. Although the bowl costs 30 cents more than the burrito, I'd still recommend getting the bowl, as it provides substantially more to eat than the burrito filling. At World Wrapps, a bowl is advertised as a burrito minus the tortilla plus additional rice.

Jenny's bowl (below) was also good, but she didn't enjoy it as much as the Samurai Salmon. The peanut-based sauce was flavorful and was as crucial to her dish as the wasabi sauce was to mine. If you're interested in lunch at World Wrapps on a weekday, especially a Friday, get here before noon. If you don't, the restaurant will still be able to accommodate you, but parking will be difficult.