Yesterday I met Jenny for lunch in Palo Alto. As recognition at work for a job well done, we were told to go out to any place we liked. We chose Baume. 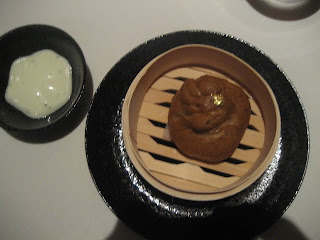 Our appetizer (above) was a leek and truffle filled steamed bun topped with gold foil. It was ordinary and could even be considered dull without the aioli. With the bun served in a bamboo steamer, comparisons to authentic Chinese steamed buns would be made by any diner. And, such a comparison would reveal this bun lacked the distinctive flavor, scrumptious filling and overall substance of what could be found at any above average dim sum or Shanghainese restaurant. To Baume's credit, the little bun was served hot and soft.

Next, came a terrine (below) as notable for its novelty--a forcemeat composed of slices of root vegetables such as beets and radishes--as its delicious sauce, a sage aioli. Our server topped our plates with the seed-like juice sacs of orange frozen in liquid nitrogen, which was intriguing but perhaps more of a gimmick. The bits of orange quickly lost their hardness. 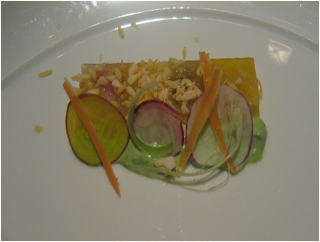 The liquid nitrogen was used also in freezing a "lime explosion" ice cream, a small scoop of which rested on miso-infused rice puffs in the middle of a soup bowl. Our server then poured hot kabocha soup at our table. The green ice cream and the orange soup complemented each other well aesthetically, but the combination also served to produce a soup that was neither hot nor cold. The rice puffs with their crunch and maple flavor were the most enjoyable part of this concoction in my mind. 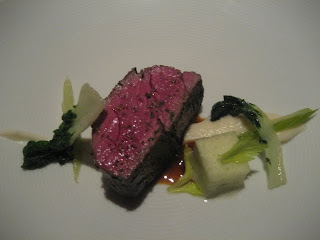 The filet mignon (above), excised from a grass-fed cow, was the most tender I'd had in a while. My wife even thought it too tender. What made the dish so distinctive, though, was the celery sponge, made by combining celery powder and egg protein. The porous little cube packed a tangy flavor and quickly melted in the mouth with a slight fizz.
Compared to the novelty of the dishes we'd had so far, dessert (below) was ho-hum. Served to us was a pumpkin cake topped with cranberry gelee along with pumpkin seeds and ginger-apple sorbet on the side. 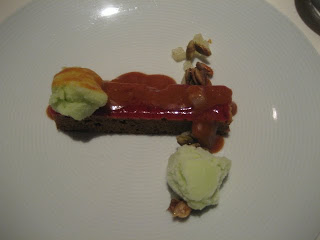 I have two complaints about Baume. First, despite dropping $166 for lunch, we both left Baume still needing more to eat. For me, three apples and an energy bar in the afternoon still weren't enough to keep hunger at bay. Second, the one table that left before us was given a package of marshmallows as a send-off. This is a common practice for restaurants at this price point. Over the past year, for example, we left French Laundry and Manresa with similar good-bye presents. However, for our farewell we got nothing but the bill. Granted, it may have been because the other table had the more expensive menu and, besides, I really didn't care about the marshmallows themselves (other than that I was hungry even after dessert). But, still: to offer a take-home within earshot of other guests who aren't destined for a similar courtesy is bad form, plain and simple.
201 South California Avenue
Palo Alto, CA 94306-1912
(650) 328-8899
www.baumerestaurant.com
Posted by Loren at 9:32 PM