On our way to Happy Hollow in San Jose, we stopped at Huong Lan on Tully Road to pick up lunch to go. Jenny and I have long been fans of Vietnamese baguette sandwiches, or banh mi. 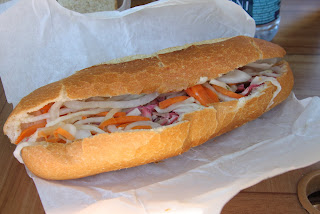 We got two different flavors for our three sandwiches (I ate one of each): grilled pork and barbecued pork. The pickled jicama and carrot with the mayonaise added a tanginess that went well with the sweetness of the barbecued--and grilled--pork. The bread was crisp on the outside and delightfully soft on the inside. And, to be fair, the cracks in the bread you see in the barbecued sandwich above came from it bouncing around in our bag during our trip through the park. 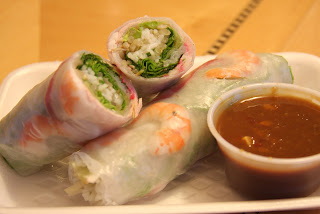 The shrimp spring rolls were cold and refreshing, with the shrimp suitably crunchy. The lettuce was crisp and the mint added pizazz to every bite.

Though I was well rested, the second sandwich nevertheless hit me like a hammer, sending me into a daze that afternoon. Keeping me awake, though, was my thirst. Jenny was likewise craving water, suggesting the meats were spiked with sodium.

By the way, one can get an entire roast pig for $175. And, judging by the two that flew out the door during the five minutes we were there, it's a popular item.