We began our day in South Tahoe with the goal of circling the Lake in a day--a journey of about 70 miles. At lunchtime we hit Tahoe City and dropped by Fat Cat Cafe, which is on the main drag through town. Within seconds upon entering, I was struck by the fact that this restaurant takes its rules very seriously. On the front door, in big capital letters on a placard the size of a poster a sign read, "NO ALCOHOLIC BEVERAGES BEYOND THIS POINT", making it clear one wasn't allowed to bring in his own drinks. At the bar, again in all caps, a sign read, "20% GRATUITY ADDED TO ALL LEFT TABS. BRING YOUR CREDIT CARD HOME", whatever that meant. The kicker was that following us into the restaurant was a woman who brought in two plastic bags and what looked to me to be a yellow insulated lunch box. Almost immediately, a heavily tattooed man at the bar, perhaps the manager or owner, shouted to her across the room, "Hey, what's in the bag?" When she opened one of her plastic grocery bags, he said, "No, no, no! The yellow bag! Tell me what's in the YELLOW bag!" To which the woman answered, "You know what? I don't want to eat here", and promptly walked out. I wanted to follow her in support of her protest, but we were already seated and the smiling waiter was just then handing us our menus.
The tense environment aside, the fact is the quality of our lunch was easily above average, although a little expensive. Each of the kids had a mac and cheese, made with a four-cheese sauce and topped with panko bread crumbs. Jenny and I split two "small plates" for lunch. Wanting something simple, I had the bacon and mushroom quesadillas, which went very well with the sour cream and chives and the freshly chopped tomatoes. 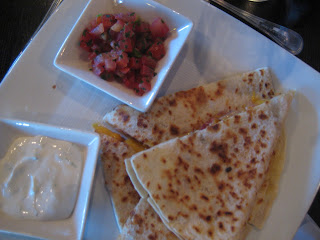 My wife got the best dish of the three, though, which was the ahi with fried wonton skins. Sprinkled on top of the ahi were both white and black sesame seeds. The light sauce hinted subtly of a vinaigrette. The avocados on the side complemented the fish nicely. 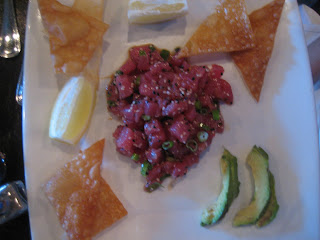 Before tax and tip, lunch came to $36, a bit much for a lunch that would not have filled us up if not for the twins' leftovers. Given the yellow bag episode at the beginning of the lunch, though, I can't recommend this restaurant. I understand they had a rule against bringing alcohol to enforce. But to shout across the room at a customer with an accusing tone is out of line.
The Fat Cat Cafe
599 N Tahoe Blvd
Tahoe City, CA 96145
(530) 583-3355
www.fatcattahoe.com
Posted by Loren at 9:12 PM