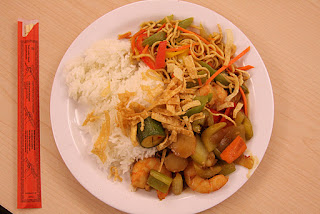 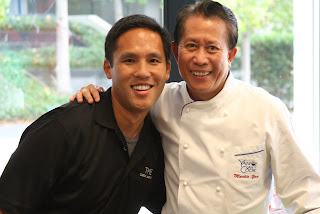 Martin Yan visited my company's cafeteria earlier this week and put on a cooking show. With his charisma, sharp wit and sense of humor Martin Yan is hard not to like. So, none of us minded that he spent close to an hour selling us autographed cookbooks and cleavers bearing his name while giving what amounted to a live infomercial. It was quite a cleaver he wielded, though, as he dazzled us by cutting cucumber slices thin enough to read through. His cooking demonstration, which featured deboning a chicken in less than twenty seconds (the trick, apparently, is to massage the bird before attacking it with said cleaver) yielded stir fried chicken and beef dishes, each with ginger, garlic, green onions and peppers. Though tasty enough (food often tastes better after seeing it prepared--ever notice that?) both were a bit heavy with the salty sauces (like soy and Hoisin). 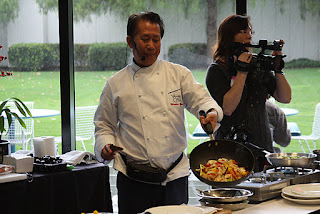 This style over substance continued with our featured cafeteria dish, kung pao, which was prepared from a Martin Yan recipe. The kung pao could be ordered with shrimp, chicken or tofu. It was so-so. The dish was served over fried wonton strips and yakisoba noodles, making the presentation rather Americanized (if not reminiscent of the 90s). Thought the shrimp was well prepared, the entree wasn't as spicy as one would expect from a kung pao dish.

We came for the show, though, as much as for the food. And in that respect Martin Yan didn't disappoint. He made us all smile and laugh smack in the middle of the workweek--something that food, no matter how delicious, doesn't do.
Posted by Loren at 4:14 PM