First off, I want to give photo credits to bananawonder.com (octopus) and sugarcoatedsisters.com (steak fries) for the photos here. I didn't have my camera with me when I went to Evvia with Jenny yesterday to celebrate her birthday. The lamb chops, including the steak fries, appeared very similar to the photo. The image of the octopus is right on, just like the dish itself, in fact. Oh, that octopus (or, "octapodaki tou Yiourgou", as it appeared on the bill). If you get only one dish at Evvia, get the Octopus appetizer. It won't fill you (but you can load up on bread) and the chops taste better. However, eating the octopus at Evvia is an experience and, as far as I can tell, you can't get anything quite like it around here. 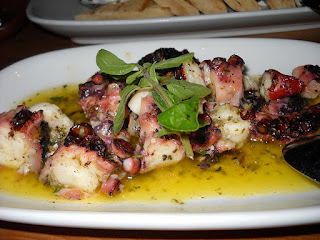 The octopus was served warm with lemon, olive oil and oregano, drowning out any intrinsic flavor the meat may have had. The real feature is the texture. One may associate octopus with a rubbery feel, but yesterday's was soft, even doughy and to a certain extent melted in the mouth. I kept grabbing one piece after another because I couldn't quite believe what I'd just tasted.

Jenny's aforementioned lamb chops ($27.50 for two chops) and my snapper followed after a long wait. I ordered a whole snapper (a steep $34), mesquite grilled. It came filleted and hot. One portion, near the belly, was well done but the rest was delicious. My wife's chops were as tender as red meat can come. I noticed she ate every cubic micron of meat on each bone--something she normally doesn't do. 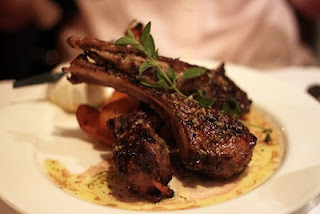 The day's downside? The service was slow, slow, slow. The octopus came fast enough, but our main courses didn't arrive until more than half an hour after we ordered, or 50 minutes after we walked through the door. The food is certainly worth coming back for--even at these prices--but the length of time needed for a meal makes a visit impractical, especially in the middle of a workday.
Posted by Loren at 10:49 PM