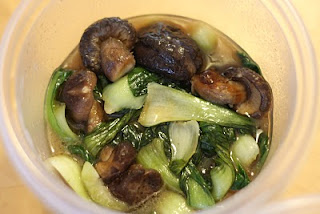 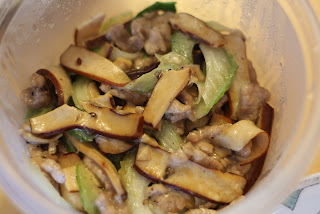 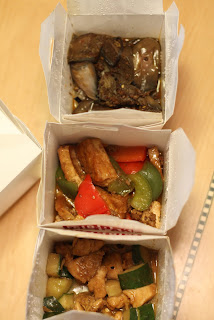 Earlier this month we started using a food delivery service called "Chinese2door", which delivers Chinese food in the South Bay and the Peninsula. Jenny found them on craigslist, but they can now also be found on Facebook. For a mere $20 one can get two meat dishes and and a veggie dish. And, here's the best part: Included are taxes and delivery to your door!

The choices change every day, but generally there's a list of six dishes to choose from, four of them meat, two veg. For our first try we got seafood pot stew, sauteed pork slices with bean curd and sauteed bok choy with mushrooms. The dishes come with rice.

The dinner was more than enough for four of us. One of my boys really enjoyed the sauteed pork and I had to agree it was the best of the three dishes. The seafood stew had clams, shrimp and tofu. However, the crab was imitation and was a bit doughy. The mushrooms in the vegetable dish was a bit on the chewy side.

They said on the phone and in their craigslist ad that there was no MSG--I'm very happy to confirm that. They also told my wife on the phone that this was real Chinese food and "not Panda Express--there's no sweet and sour chicken". With the ad partly in Chinese text and with this being the Bay Area, I expected nothing less.

We tried the service twice more. A couple of additional comments: their egg plant dish looked unappealing, but it tasted and went down fine. Secondly, fish is their strength.

While I would have liked more meat in the meat dishes, for a home delivery of $20 that includes tax for what's obviously a home-cooked meal I can't complain. Have a back-up plan, though, as over the past week or so they've been fairly unresponsive.