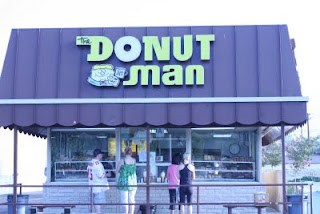 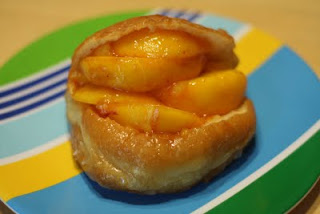 Our trip through SoCal wrapped up with a donut stop in Glendora. Knowing this institution would get crowded very quickly after opening, we got their early. Indeed, there was already a line at 7:30 on a Sunday morning. Known for their strawberry and peach donuts, we got some of the latter, which was out of this world. The peach itself was fresh, firm and tasted as though it was just cut. The "donut" was sweet and super soft. The Bavarian cream donut was good, but it was something that could be found elsewhere. The same could be said about the tiger's tail, which my mom-in-law actually enjoyed more than the peach donut because it "tasted more like a donut".

For me and Jenny, though, the peach donut was what made The Donut Man special. The firmness and the slightly tart flavor of the peach matched perfectly the soft sugary donut. What a delightful little sandwich!