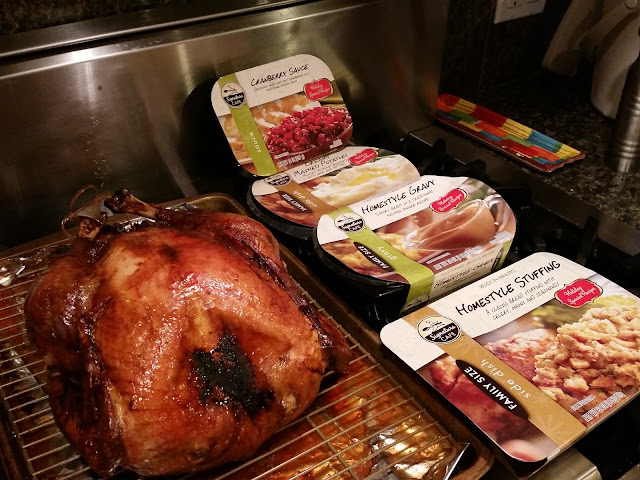 For Thanksgiving yesterday we got Safeway's boxed Thanksgiving meal. For $49.95 we got what you see in the picture above. The turkey was about ten pounds. Between two adults and two twelve-year-olds we ate about half of everything, including the bird.

What we received from Safeway was a good value, especially considering how much work it saved us. But, a similar offering from Lucky this year also included a green bean casserole and rolls. We tried Safeway this year, though, partly because it's closer and partly because we hadn't tried their packaged Thanksgiving dinner before.

The turkey, precooked, was tender and the aroma filled our home as if we made it from scratch ourselves. I would get this package again, but am more likely to go with Lucky next time because of the value. Whether you get a Safeway or Lucky turkey, though, be sure to pick it up about three days in advance to let it thaw in the fridge in time for Thanksgiving.
Posted by Loren at 11:21 AM