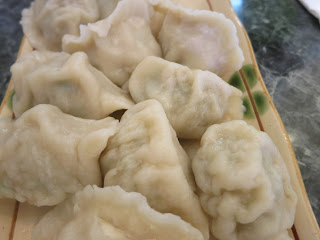 Last weekend we went up to the San Mateo County History Museum for the Lunar New Year celebration. Within walking distance, in Redwood City, is I Dumpling, where we grabbed lunch. I'll say upfront that this is the place to go if you're in the mood for wood ear, that slightly rubbery black fungus commonly found in Chinese dishes. It seemed no matter what soup we ordered, there was no escape from it. But, more on that later. As the restaurant name implies, this is a dumpling house. And, the pork dumplings we had were made on site and were quite good--by far the best dish, in fact. The skin had just the right amount of stretch and fight to it. The pork inside was tender. 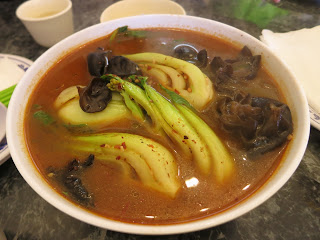 The xiao long bao, however, was a disappointment. Rather than the soupy, tightly wrapped dumplings with many distinct folds on top, what we got looked like big bells. The skin was far too thick to be considered authentic and the folds, if there were any, were hardly visible. The soup inside was acceptable, but part of the fun of a proper xiao long bao is nibbling on the skin to get at the soup. One couldn't really do that with these monsters.

In speaking of soup, be prepared for boat-loads of fungus if you order any. I got the spicy beef noodle soup. Unfortunately, there was hardly any beef in it. Although it was plenty spicy, I'd have to rank it in the lower half of the beef noodle soups I've had because it of the lack of meat and it was very different from what one would normally expect. My son got the wonton noodle soup. They enjoyed their soups, but left the wood ears to their parents. 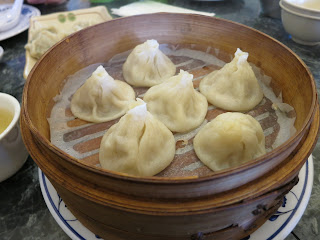 Although one may have issues with the bowls and baskets, it's very hard to reasonably complain about the price. As the menu shots below indicate, pricing is more than fair. We got three bowls of soup, a basket of XLB and a plate of dumplings for about $30 before the tip. In fact, if you just stick to the hand made dumplings your experience could end up being quite positive. 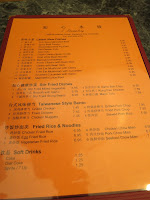