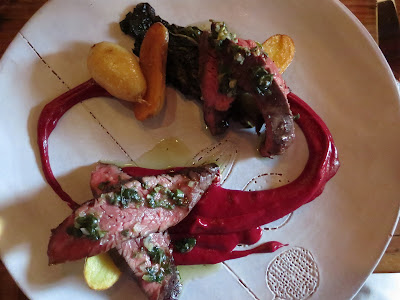 Last month my wife and I went to Station 1 Restaurant in Woodside to celebrate our 12th anniversary. Although the fixed-price menu came out to $60 per, the staff was down-to-earth and dinner was a good value. We started with complimentary soup featuring a summer melon puree, maple syrup and rye. The components, served segregated, tasted much better together than individually--especially the rye. :) 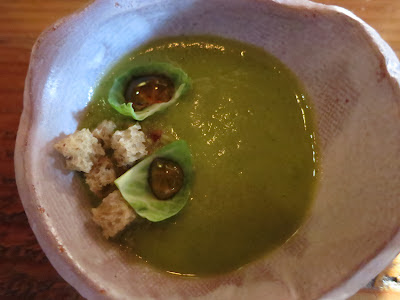 To start, I got the Farm Egg mostly to see what they could do with something so mundane. The egg, served very soft and runny, came with pickled garlic, beluga lentils, mache lettuce, sumac and prosciutto, which had the consistency and flavor of bacon. 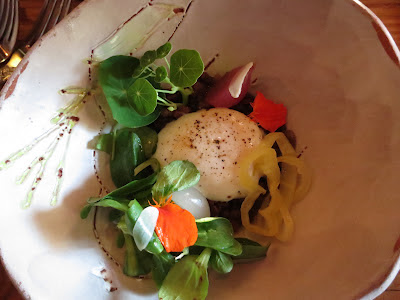 The pickled garlic dominated the flavor of this dish and one should know what he's getting into when ordering it. Jenny got the Pappardelle. While she liked it, it wasn't something she'd get again. The radish even came with the green leaves attached and it added some much-needed color. Trying a sample, I picked up the poppy seed the most. 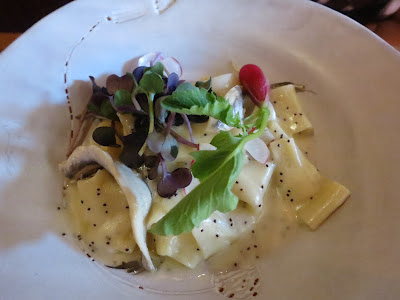 Jenny had the black cod as her entree. The fish flaked off easily and was as flavorful a sliver of cod I'd ever had (kind of like saying the most colorful shade of gray, but still...). Sea urchin was the most intriguing ingredient in the sauce. 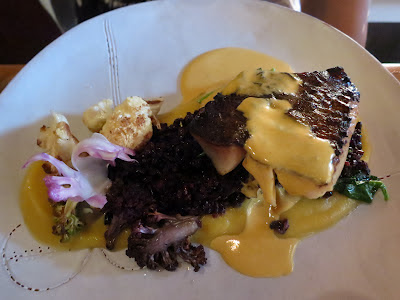 I had the Hanger Steak and loved my choice. The steak, medium rare, was the tenderest cut of beef I'd had in years. Those big red swirls you see in the photo are the corn and red beet pudding. The beet gave the pudding its color, and the corn its flavor.

Cleaning the palate was a spoonful of fig with riccota cheese. 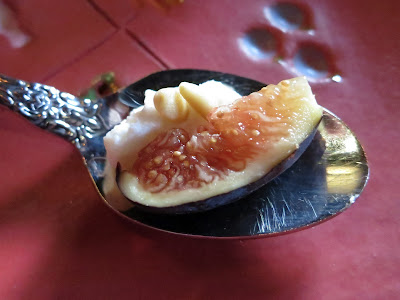 For dessert, Jenny's chocolate semifreddo was on the heavier side, but when is chocolate not a pleasure? 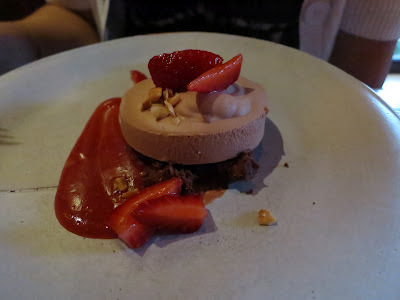 My buttermilk panna cotta was superbly refreshing. The slab of panna cotta sat in a honeydew with small cantelope balls. The plum sorbet, cold and tart, complemented well this fresh fruity plate, but was otherwise unexceptional. 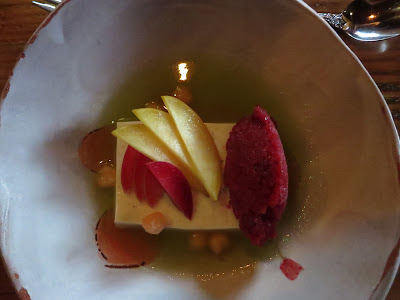 Station 1 executed wonderfully and I can't think of a more pleasurable dining experience with which to celebrate my anniversary. The homey ambiance at Station 1 made me want to stay there for hours. The kids were waiting at home, however, and I'm very grateful to Jenny's parents for giving us the opportunity to have such a great dinner.
2991 Woodside Road
Woodside, CA 94062
Posted by Loren at 9:12 PM