Last month I met my match at the Big Island Grill in Kona. For the first time ever at breakfast, I walked away (more like rolled away) leaving food on the table. (And, I'm a guy who bought $18 worth of pancakes at IHOP and still left hungry.) Though I had a corned beef hash with home-made patties, I still ordered three-pancake stacks--both with strawberries--for each of my boys, thinking that finishing what they left behind would be a cinch. 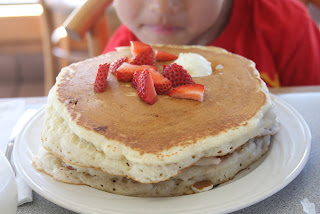 The hash was good, but the quantity was marginal. My wife's three-egg omelet, which featured ham, bell peppers and mushrooms, was the better choice. As for the boys' pancakes, they each left me two. I appreciated that the strawberries came mixed-in with the batter, instead of merely sprinkled on top. The coconut syrup was also something not commonly seen. It gave the pancakes a distinct coconut flavor, but when combined with maple syrup it was drowned out. Overall, though, the pancakes were marked more by quantity than quality. The skin of the pancake peeled off easily, although everything--skin and all--was soft and fluffy. 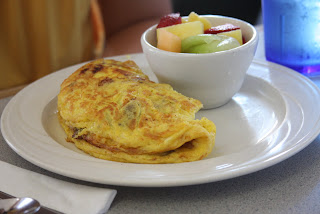 Though I was comfortable through the three pancakes, I just couldn't power my way through the fourth. My breakfast won. 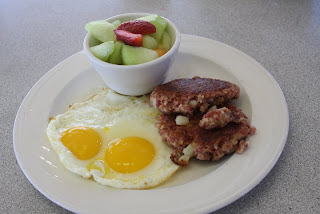