On our way to the Chabot Space and Science Center in Oakland last weekend we dropped by De Afghanan Kabab in Fremont. Mainly a to-go restaurant (there are only three tables inside, one outside), the line to order for most of the evening went out into the street.
Everything was made to order in front of us. We ordered lamb and chicken kabobs initially, but were enticed by the gigantic potato turnover (see in photo below underneath the big metal paddle) and ordered one of those as well. 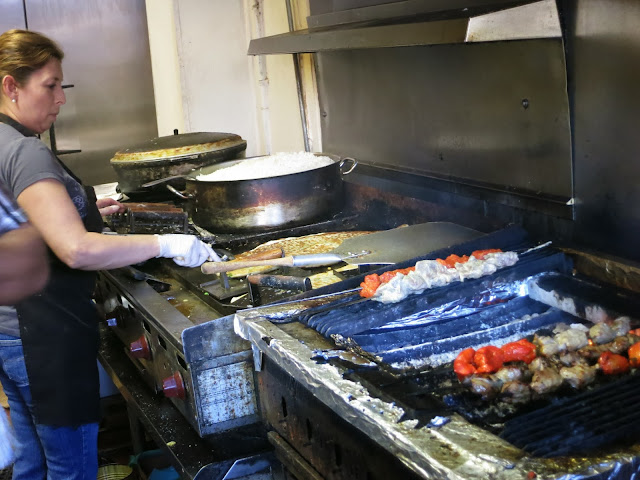 The cook was very diligent about snipping any charred parts of the meat and the result were kabobs that were as pleasing to the eye as they were tender and juicy. The dishes were salty, though, and we spent the rest of the night searching for water at Chabot wherever we could find it.

The most distinctive and memorable order was the Bolani Kachaloo, a turnover filled with potato and leeks. Jenny likened it to a big onion pancake one might get in a Chinese restaurant. I tend to agree with her, though the Chinese version is a tad more crisp and maybe even greasier still.
One thing I didn't like that left a bad taste in my mouth, so to speak, was how the bill was totaled. There was no paper bill; I was only told what the total would be. He just rounded it up generously (generously to the restaurant) to $35. The place was busy and we were in a hurry, though, and I didn't fight it. All that said, the restaurant will continue to get away with accounting shenanigans like this. It's like Bay Area housing: The seller calls his price above list and buyers will still line up.