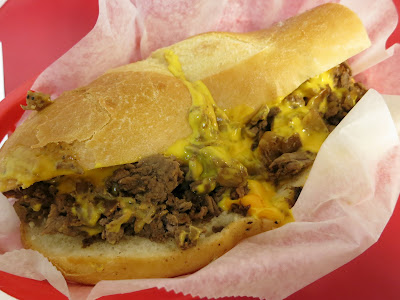 Earlier this week I met my pal at Amato's for a good old cheesesteak sandwich. With my friend born and raised in Philadelphia (and a bit of a sandwich expert at that), I knew I could trust him to take me to a spot which wouldn't disappoint--and Amato's didn't.

Things got off to a great start with a mountain of fries that were crisp on the outside and fluffy inside. With such a substantial thermal mass, they stayed warm for nearly an hour. The two of us never did get to the bottom of the basket and we end up leaving with food on the table--a true rarity. Of those fries, I can't think of a more pleasant way to get full on just a hair over three bucks. 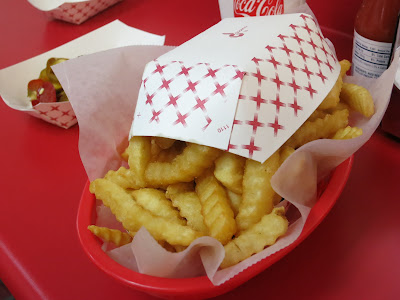 But, one certainly doesn't need the fries to get full at Amato's. There are many ways to pop your belly here. My method of choice, of course, was the cheesesteak sandwich, which came in three sizes: "shorty", "half" and "whole". If you're tackling a sandwich on your own, don't get anything but the "shorty", which amounts to an all-the-cheesesteak-you-can-eat buffet on its own. Wanting the authentic experience, I went with Cheese Whiz. My lunch partner knew ahead of time to get me a separate dish--to hold half the sandwich. Though it was a little salty, I loved every bite. It was a little messy, though, as the Cheese Whiz was a little overwhelming (in a good way). Napkins are plentiful at Amato's for a reason!

I was told the main difference between Amato's and the best joints in Philly are the bread (ours was a little doughy) and the fact that the cheese is painted on the bread rather than dumped in massive quantities on the meat. I was also told that the Philly meat is a little more tender. 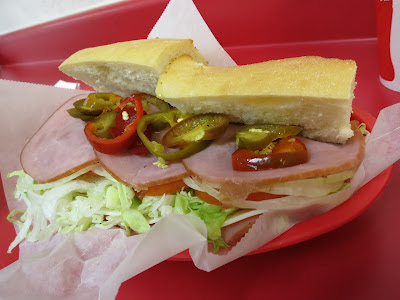 I wasn't the only one at the counter getting a boat of a sandwich. My friend got a ham and cheese hoagie, which he adorned with peppers and thoroughly enjoyed.

Are you interested in eating at Amato's? I have a bit of advice. Amato's has a way of being closed without warning. The first two times I tried going, they were closed--once because the electricity was out. You're best advised to call ahead of time. And, when it's open getting in can be a pretty tough ticket. When we went two days ago, though, there was ample seating at the counter against the wall. 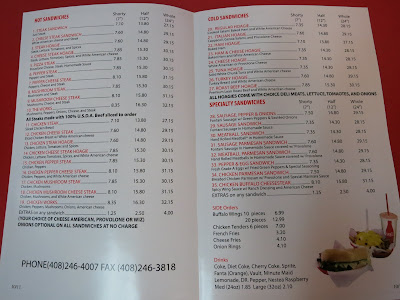