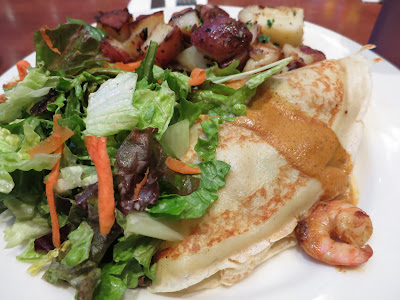 A couple of weekends ago Tyler and I went to Crepevine on our way to a Cub Scout event. As soon as we entered the casual, airy envioronment of Crepevine, we realized it was a place where we could let down our guard and relax. After ordering at the counter we could sit wherever we wanted and chose a roomy booth, where we were served our dinner. (And, even when we left at quarter to six, there was still plenty of seating available.) 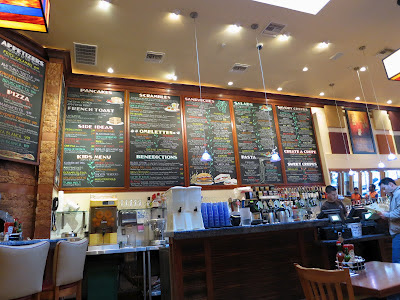 Knowing I had to choose a crepe, I had the Bombay, which was loaded with hot shrimp, but they were nevertheless a little underdone. The crepe itself was silky soft. The roasted house potatoes came included with the dish but were nothing extraordinary. The mixed greens wouldn't beat what comes out of a box from Costco, but I appreciated that the crepe came with a salad.

Tyler had the Polmero, which was fetuccini alfredo with parmesan. It was thick and rich, as one would expect and had no problem filling up Little Big Boy. The toast was buttery, crisp and soft underneath. 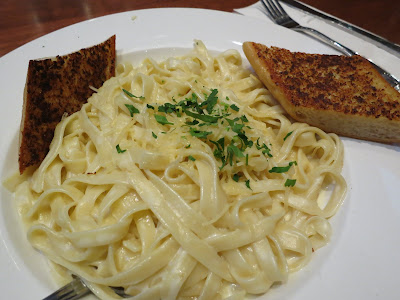 In sum? Crepevine is a terrific low key, casual escape that offers an extensive menu. That menu, by the way, is itself worth a visit. While we waited and even while we ate, Tyler and I spent much of our time admiring the art that was the menu on the blackboard. What a great job! Zoom in on the photo and take a look.