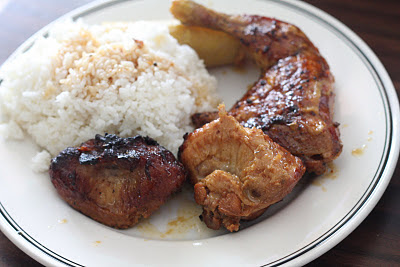 On our way to the San Francisco Zoo last week we stopped by Daly City to eat lunch at South Pacific Island Restaurant in Daly City. South Pacific offers Samoan cuisine which meant, in my mind, turkey tail. Containing no less than 73% fat (as measured by calories), the delicacy has the consistency and flavor of dark turkey meat but with some more fat thrown in. Even though the service was with a smile and the pineapple pie a hit, the turkey tail was the highlight of my visit.

For $11.99 we could order a plate with three meats and one starch. I soon found out that the rules at South Pacific are anything but rigid and you could actually have any number of meats and starches; the friendly guy behind the counter would scale things accordingly. So, in addition to the tail we got meatballs in gravy and chicken. For starch we ordered rice and a "borderline sweet" plantain, which Jenny didn't really enjoy. I agree with her that it was dull--much like taro--but I liked the texture (similar perhaps to a slightly undercooked potato) nevertheless. 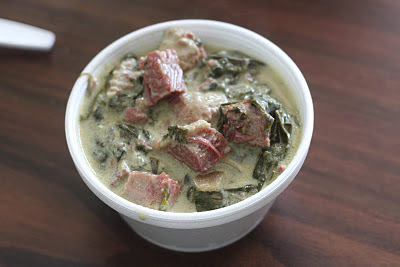 In speaking of taro, we got a side of moa, made with taro leaves, coconut milk and chunks of corned beef. It was rich, but scrumptious. If there was any doubt we'd had enough to eat, the moa erased it. (Though Tyler liked the meatball gravy so much he drank it straight.) For dessert, we shared a pineapple pie, which I liked for its thick, hard crust. 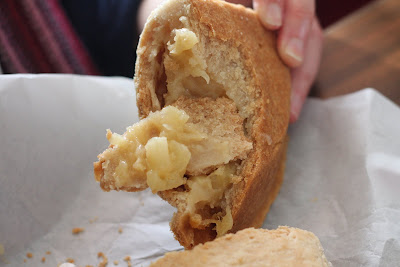 Overall, the value was outstanding. The plate and moa would total about $15 before tax and together they fed this family of four. But, enhancing the experience was the impeccable hospitality. The man behind the counter welcomed us warmly and treated us as friends. Even though we got the plate, moa and two pineapple pies (the second was to go) the total, tax included, somehow came to $16. When I mentioned there was a mistake and the total should be close to $25 I was told that the discount was the owner's decision and nothing could really be done. It's that generous, warm-hearted attitude toward their customers that I really admire about South Pacific. However, honestly, it'll be those turkey tails that will bring me back.