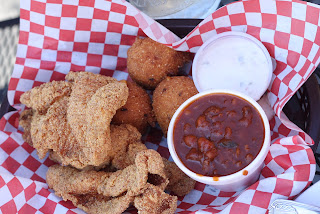 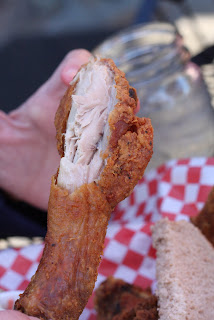 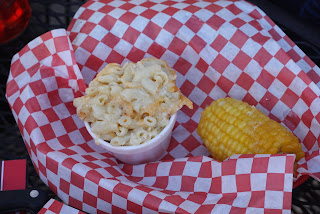 The lack of bone-in chicken and catfish in Big Ant's inventory a few weeks ago left a void in our soul-food starved stomachs. So, last weekend we turned to Lillie Mae's and they didn't disappoint. I got the catfish with hush puppies. The fried fish was the juiciest, tenderest and hottest I'd had in memory. Making every bite of the catfish interesting was the crisp cornmeal batter. I could choose one side and got the "Boomin Baked Beans", which made a great sauce for the hush puppies. The hush puppies, recommended to me by the cashier, wasn't anything out of this world, but they kept my kids busy after they quickly polished off their mac and cheese.

Chosen from the kids menu, the mac and cheese came in a little cup along with a broken cob of corn along with a drink (we picked Kool-Aid). At $5 a pop, we the parents felt scammed. The seven-year-olds ate the baked mac and cheese, their corn, and were still hungry.

Jenny got the Southern fried chicken and, just as with the catfish, loved that it was crisp, non-greasy and light. She also noticed the chicken had its skin removed, which may have been a secret to its light yet crunchy texture.

A mere ten minutes away from work, this soul food haven will forever tempt me. Having gained a bit of weight over the past several months, my body doesn't need a dose of Lillie Mae's. Yet, I can't go long without that delightful catfish either.