Earlier this week my colleagues and I had lunch at a favorite restaurant of ours: Kabul. The occasion was an awards lunch and I can't think of a better place to celebrate. Known for their kebabs and wide array of other Afghan entrees, appetizers and desserts, Kabul serves dishes as delectable as they are consistent.

We started off with a few appetizers. Mantu is a soft tube-dumpling filled with ground lamb. The appetizer was as much about the vegetable sauce, though, as it submerged the dumplings, making them seem like a sideshow. In all, the dish was flavorful and hearty. But, don't get it for the lamb. 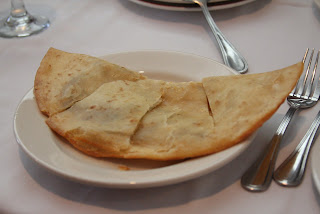 The bulanee katchalu, a turnover with ground lamb, mashed potatoes and spices had a crispy fried crust. Unfortunately, that's all I can really comment on, as the piece I grabbed had no filling in it, indicating an uneven filling distribution. Those fortunate enough to have taste the appetizer in its fullest, though, told me it was delicious. 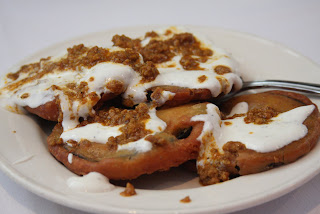 The last appetizer I was treated to was pakawra-e-badenjan, batter-dipped slices of eggplant topped with yogurt and meat sauce. It was crisp and tasty. The topping dominated the flavor and the texture was set by the fried batter. So, the slice of eggplant was merely a substrate for the batter and sauce. 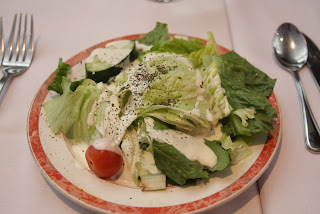 For my entree, I went with the seafood combo kebab. Some at the table were dissuaded from eating the salmon since it's a cold water fish not available in Afghanistan. True, perhaps, but their salmon is usually a can't-miss. At this specific lunch, though, the fish was a little overdone. The shrimp was the right level of doneness, but the seasoning was a tad salty. Next time I'll go with just the salmon, which is almost always moist, tender and flaky with an elegantly crisp surface. 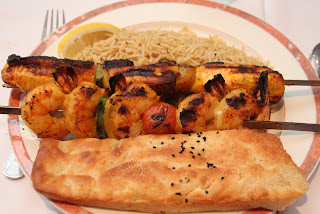 I'd be remiss to not cover the salad or the bread, which my kids love. Known in my family as "Kabul bread", the focaccia bread served here is always fresh, fluffy, soft and warm. For my boys, it's a reason alone to visit. Although the salad is basic--lettuce, tomatoes, maybe a cucumber--it's always cold and crisp. Eat up quickly, though, when you carry this out. As fresh as the bread and salad are, both can go stale in a day or so.

At my workplace, Kabul is a common choice for those enjoying their last lunch with colleagues before retiring. If my retirement party were held today, I'd choose Kabul, too.

In speaking of work, I've had a lot of it lately. And, over the next few months there will be even more to come. So, I'll be unable to update this blog on a regular basis until at least the end of this summer. Check in about once every month or so, though, and you'll probably see something new here at 4chow.com.