A great friend of mine was gracious enough to spend part of his birthday with me yesterday and we chose to meet at Maxim's in San Jose on Saratoga Avenue for lunch. Formerly a part of the Max's Opera Cafe chain, the restaurant has been under a different management for at least two years. However, from Max's they kept the menu, location and a name similar enough to give pause to any trademark attorney. 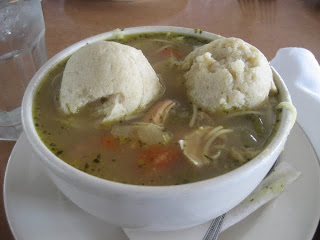 At Maxim's or at Max's, the matzo ball soup has always been a must-have. Today, though, it was very, very salty--the saltiest soup of any kind I've had anywhere in years. Otherwise, beneath the thick cover of brine one could still detect a rich flavor in the broth. Moreover, the soup was hot and loaded with chicken and vegetables. Ordering a bowl, by the way, gets you two matzo balls, while a cup gets you one. 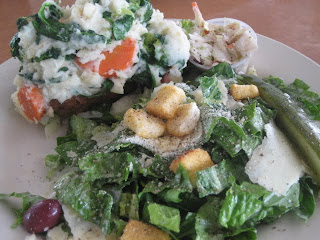 Another of my standbys is the vegetable double stuffed potato, which today was good, but only about 70% of the size of that at Max's Opera Cafe. The dish came with plenty of Caesar salad on the side. My friend's pastrami sandwich was thick and, though I'd forgotten to ask if he enjoyed his meal, he finished it without complaint. 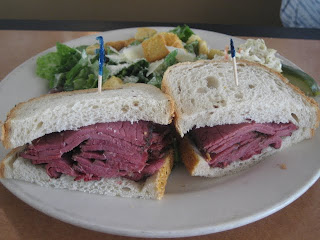 As for service, I would have appreciated some bread to be delivered to our table. At Maxim's, as at Max's, their freshly baked bread is beyond the ordinary. If you go, request a basket and try out their raisin bread, for example. Also, when we arrived at our booth, both benches were dirty with crumbs, which we swiped off with our hands. And, along with that oversalted matzo ball soup? I got a rusty spoon. My lunch partner was so engaging, though, that I thought about the bread and a new spoon only when it was too late.

All that said, of course, I'll return to Maxim's as I always end up doing. It's a step down from the original Max's--and it's no less expensive--but the difference is compensated for by the proximity to work.

The restaurant is nearly empty at lunchtime, by the way, so come anytime you like. Cole slaw and pickles come with your dish upon request.